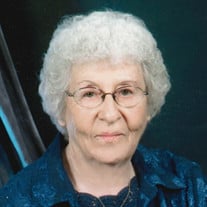 Margaret Lucile Batten, the daughter of James and Margaret (Marshall) Batten, was born November 25, 1924 in Chariton, Iowa. Later in her teens she moved to Hiteman, Iowa where she attended high school. Margaret enjoyed dancing and roller skating. Many times she would say, “I would rather go dancing than eat any day.” Margaret came to Harlan to be with her sister Jane, and during that time, she met Norman Wiig. Margaret and Norman were united in marriage on December 19, 1943 at St. Paul’s Lutheran Church in Irwin, Iowa where they were Lifetime members. This union gave birth to four children: Gene, Larry, Cathy, and Terry. Margaret spent her life as a homemaker, farmer’s wife, and a dedicated mother. She loved taking care of her family. Margaret was a wonderful cook and baker. She always had something on hand and ready to eat for anyone who would stop by. It was guaranteed that you wouldn’t leave Margaret’s without eating. Along with her baking and cooking, Margaret enjoyed sewing, crocheting, and playing endless hours of cards with friends and family. She so enjoyed and looked forward to spending time with her sister, Jane, where they would tell stories and have countless hour of laughter together. In Margaret’s later years, she enjoyed doing her word search books. Margaret was a dedicated member of St. Paul’s Lutheran Church in Irwin where she taught Sunday School and was faithful to the Ladies Aid and her Circle. Some of Margaret’s great grandchildren would play hookie from school so they could go to grandma’s house for the day and hang out, play cards, and make mac and cheese. She was a wonderful wife, mom, grandma, and friend. On Friday, November 13, 2020, Margaret passed away at Elm Crest Senior Living Community at the age of 95 years. She was preceded in death by her parents, her husband Norman, her sons Gene and Terry Wiig, and siblings Jack, Parley, Jimmy, Bob, Eleanor, and Jane. Those left to cherish her memory include her son Larry Wiig of Council Bluffs, Iowa; daughter Cathy Cavenaugh and her husband Gene of Harlan; daughter-in-law Julie Wiig of Kirkman, Iowa; seven grandchildren; eight great grandchildren; and many nieces, nephews, other relatives, and friends.

The family of Margaret L Wiig created this Life Tributes page to make it easy to share your memories.

Margaret Lucile Batten, the daughter of James and Margaret (Marshall)...

Send flowers to the Wiig family.