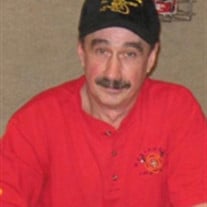 Marcus Walter Kaufman, son of Anthony Kaufman and Rosalia (Fuhs) was born in Earling, Iowa by a midwife on November 29, 1949. He was baptized, received 1st Communion and confirmed at St. Boniface Catholic Church in Westphalia. On April 17, 1971, Marcus was united in marriage to Linda Majerus at St. Boniface Church in Westphalia. They raised two children: Michelle and Mark. During his lifetime, Marc enjoyed aspects of farming and raised hogs and cattle. He was involved in St. Boniface Church by being as usher on Sundays, served on the finance counsel, vice president of the Holy Name Society and worked for the town picnics and dances. He joined the Westphalia Fire Department in 1976 and served as vice president for 21 years. He enjoyed the time with his fire fighting family going to water fights and conventions. Marc was involved in his kids activities including church dances, driving them to CYO games and proudly watching them play ball. He was happy to join the FFA Alumni and was involved even after his son was out of school. He jokingly told the leader the FFA not only meant Future Farmers of America, but also, Fathers Farming Alone, since the kids were always at an FFA activity or contest. He helped at the yearly FFA banquets and served as president and vice president. Marc’s family, fire department and farming were important in his life. Although an auto accident in 2010 changed certain aspects of his life, he continued to farm and proudly serve his community on the fire department and was active in the Westphalia community. After being apart for 4 ½ years, Marc and Linda were reunited when he joined her on December 11, 2020, attaining the age of 71 years and 12 days. In addition to his parents and wife, he was preceded in death by an infant sister and brothers-in-law. He is survived by his children Michelle (Greg) Alter of Sergeant Bluff, Iowa and Mark (Tahni) Kaufman of Harlan, Iowa; 10 grandchildren; 3 great grandchildren; a sister, Marj (Leo) Kramer of Omaha, Nebraska; a brother, Don Kaufman of Portsmouth, Iowa; and many other family members and dear friends. Masks, Social Distancing & 15 person limit at a time are required during visitation hours

Marcus Walter Kaufman, son of Anthony Kaufman and Rosalia (Fuhs) was born in Earling, Iowa by a midwife on November 29, 1949. He was baptized, received 1st Communion and confirmed at St. Boniface Catholic Church in Westphalia. On April 17,... View Obituary & Service Information

The family of Marcus Walter Kaufman created this Life Tributes page to make it easy to share your memories.

Send flowers to the Kaufman family.