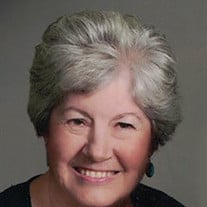 Lynn (Weberg) Sandquist peacefully passed away in her sleep at 7:30AM Saturday, February 19, 2022 at the Pillars Hospice Home in Oakdale, MN. Lynn and her husband Ron have been residents of Woodbury, MN since 1970. Lynn was born in Denison, Iowa on April 29,1942. Her youth was spent at the Weberg family farm in Kiron, Iowa and then the family moved to the town of Kiron. She attended Kiron Elementary School and graduated from Denison High School in 1960. Lynn graduated from St Olaf College in 1964 with a BSN nursing degree. Lynn was loved by many. She has been described as kind and sweet with a gentle spirit. Her smile uplifted many. She was a bookworm, always with a book within reach. Her love of babies was with her throughout her life. Lynn was an OB nurse; taught OB Nursing, and took care of babies for 30 years at the Grove United Methodist Church Preschool. In her later years Lynn was also a labor doula. Lynn and Ron were so thankful that they were able to care for each of their 5 grandchildren in their early years. Her Christian faith, her family and friends, her nursing career, were very important to Lynn. Lynn was diagnosed as having MDS in September, 2018. In December, 2020 Lynn was diagnosed as having Acute Myeloid Leukemia (AML), which was successfully managed for over one year. For the last 3 1/2 years Lynn was treated at The Mayo Clinic in Rochester, MN and at M Health Fairview Cancer Center-Woodbury. Lynn was especially fond of the staff at both places. Dr Aref Al-Kali MD, a Mayo hematologist, held a special place in Lynn’s heart. He was able to enroll Lynn in number of drug trials that prolonged her life and he also provided great care for Lynn. Since early January, 2022 the AML had become a very aggressive force in Lynn’s body. The chemo treatments became ineffective. Lynn chose to enter hospice. The last 3 weeks of Lynn’s life were spent at the Pillars Hospice Home in Oakdale, MN which included services from Lakeview Hospice. The Pillars facility, their staff and Lakeview Hospice were fabulous for Lynn and her family. Lynn was preceded in death by her parents Margaret (Pearson) and Bryan Weberg, sister Lois Buchanan, brother-in-law Chuck Buchanan, and niece Robin Buchanan. Lynn is survived by her husband of 52 1/2 years Ron Sandquist, children Garrett (Kylee), Tim (Rita) and Tonya (Chad) Hughes. Grandchildren Micah, Susanna, Russell, Emily Sandquist and Hank Hughes. The Williams and Rockwood families are considered part of the family. Lynn is also survived by nephew, Val Buchanan, nieces Jill Jahn and Ann Hayes and many great and great great nieces and nephews and cousins Jean Steyaert and Janet Nicholas. Lynn will be buried in the Kiron Cemetery. Kiron, Iowa. A private burial service will be held in Denison, Iowa, Saturday, February 26, 2022. The plan is to have a celebration of Lynn’s life at Woodbury Baptist Church on Saturday, May 21, 2022, at 2:00PM where both Lynn and Ron have been members for over 50 years. In lieu of flowers, please send memorials to: Leukemia and Lymphoma Society (lls.org); or Pillars Hospice Home, 6025 Upper 35th Street North, Oakdale, MN 55128

Lynn (Weberg) Sandquist peacefully passed away in her sleep at 7:30AM Saturday, February 19, 2022 at the Pillars Hospice Home in Oakdale, MN. Lynn and her husband Ron have been residents of Woodbury, MN since 1970. Lynn was born in Denison,... View Obituary & Service Information

The family of Lynn Sandquist created this Life Tributes page to make it easy to share your memories.

Lynn (Weberg) Sandquist peacefully passed away in her sleep at...

Send flowers to the Sandquist family.