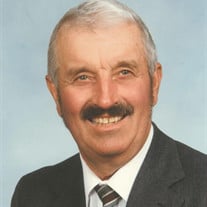 Lyle Gerhart Petersen, son of Gerhart and Grace Gaer Petersen, was born May 23, 1929 west of Redline, Iowa. He received his education in Jackson #7 and #9 Shelby County Rural Schools. A true child of the great depression, Lyle was born into a family struggling to provide the bare necessities of life. At one time they were literally down to their last nickel and living in a tent in Missouri. Out on his own after completing 8th grade, Lyle worked for various farmers until he was employed by Shelby County as the fuel truck operator and working in the shop where, self-taught, he became a skilled welder. Lyle was gifted with an innate ability to repair or improve upon most anything mechanical. Lyle purchased an acreage in Jacksonville where he brought the love of his life, Wava Peterson of Elk Horn after their marriage on June 4, 1950. The Petersen's completely remodeled their home in spare time, adding three rooms to the unfinished upper level and a full basement. Lyle excavated the dirt using only a sharp spade and a wheelbarrow. Two daughters were born to this union, Jeri Jolene in 1951, and Julie Jeanine in 1952. The opportunity to buy Wava's parents' farm beckoned and in 1964, Lyle's lifetime dream of being a farmer came true. Their land became a century farm in 1981. Lyle was a member of the Exira SDA Church, serving as a deacon. He was a Farm Bureau member, Danish Windmill member and Museum of Danish America founder. In 1997 the Petersen's were honored and humbled to be chosen as Tivoli King and Queen. In his younger years, Lyle was an avid hunter and trapper. In his later years he enjoyed constructing and flying remote control airplanes. He also did some woodworking, making many unique wren houses to give to family and friends. He was still actively farming until ill health forced him to retire as he neared the age of 90. Lyle loved farming and was so thankful for the God-given privilege of being a steward of the land. He loved his wife, daughters, grandchildren and great grandchildren, his livestock, dogs, cats and machinery. Lyle passed away on March 11, 2020 at his home surrounded by family following a long battle with cancer. He was preceded in death by his parents, in-laws, daughter Julie Shea, two grandchildren, Tara Herrera and Robin Reddick, sister Shirley Ronfeldt Alvarez, brother Arlo E. Petersen, and sister-in-law Lila Peterson. He is survived by his wife of nearly 70 years, Wava; daughter Jeri (Manuel) Herrera, Lincoln, NE, son-in-law James Shea, Longwood, FL; grandchildren Tanya (Gerik) Parmele, Columbia, MO; Jeremy Herrera, Iowa City, IA, Joel (Sarah) Herrera, Lincoln, NE, Michael Shea, Longwood, FL, Danielle Shea, Longwood, FL, and Sheridan Shea and fiancé Chad DeLong, Apopka,FL; sister-in-law Barbara Petersen, Ankeny, IA, brother-in-law Dale Peterson, Lincoln, NE, six great grandchildren, Vienne and Riis Parmele, Max and Lily Herrera, Olive and Ivy Herrera; other relatives and many friends.

Lyle Gerhart Petersen, son of Gerhart and Grace Gaer Petersen, was born May 23, 1929 west of Redline, Iowa. He received his education in Jackson #7 and #9 Shelby County Rural Schools. A true child of the great depression, Lyle was born into... View Obituary & Service Information

The family of Lyle Petersen created this Life Tributes page to make it easy to share your memories.