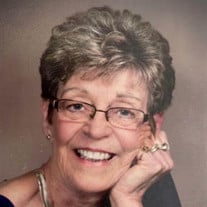 Louene June (Nelson) Palmer born March 18, 1942 in Guthrie County to Harold and Frances (Williams) Nelson. She passed away on Monday, May 30, 2022 at Brookside Assisted Living in Montevideo, MN. Louene was a graduate of Wiota High School and continued her education by attending the cosmetology school in Council Bluffs, Iowa, where she completed her licensure requirements in 1962. After her completion of cosmetology school, Louene (also known to many by the nickname Lou) married the love of her life, Ronald Lee Palmer on November 11, 1962. Shortly after their marriage the two settled in Avoca, Iowa and she opened her own beauty salon. She owned and ran that salon until the family moved to Yankton, South Dakota in January of 1978. Louene continued her cosmetology career as the family moved two more times settling in Clara City, Minnesota in August of 1984. It was at this time that she was able to delve into her other passion, book keeping. She enjoyed her early years in Clara City working as the bookkeeper at the Clara City Elevator as well Jerry’s Garage. She completed her work career working for Impact Plastic, retiring in 2018. Lou’s number one hobby was yardwork. She loved mowing her yard and planting flowers in her flower beds around the house. Another one of her passions was holiday decoration. Each holiday Lou would decorate her house to celebrate that specific holiday. Of all the holidays, the one she enjoyed decorating for the most was Christmas. Along with Ron, this tradition started early and last until her last Christmas in 2021. While married to Ron, the two loved to camp and would frequently camp with friends and family pulling their pop-up camper all over Iowa for a weekend of relaxation and socialization. An additional hobby that Lou had was making her hangers. These yarn knotted hangers were given to many of those who were special to her as gifts for special occasions. It seems appropriate that Lou passed away on Memorial Day weekend as this holiday was so special traditionally. She very much enjoyed making the rounds to pay respects to loved ones gone before her, placing flowers at their grave sites. It became even more special when one of those graves was her passed husband as she made an annual trip back to southern Iowa to visit his grave along with all the rest. Ron and Lou had two children. Todd Allan Palmer born, November 30, 1967 and Ronda Renee (Palmer) Kimpling born March 30, 1972. Both are left to cherish the memories they have of her along with their spouses Kristie Palmer and Brian Kimpling. Grandchildren: Micah Palmer and fiancé Cody, Pierre, SD; Becka (Kimpling) Bratsch and her husband Brian, Clara City MN; Sydney (Palmer) Hammerich and her Husband Zach, Fargo, ND; Kylee Kimpling, Clara City, MN; and great grandchild Palmer Bratsch. Her brother-in-law Marlin Andersen of Avoca, Iowa; Brother-in-law Tim Palmer and wife Mary of Missouri Valley, IA; sister-in-law Margie Nelson of Dexter, MN; sister-in-law Connie Andersen of Elk Horn, IA; brother-in-law Scott Palmer and wife Madeline; sister-in-law Bonnie Palmer of Le Mars, IA. She also leaves behind 20 nieces and nephews and their spouse. She was proceeded in death by her husband Ronald Palmer; her parents Harold and Frances Nelson; her mother and father-in-law William and Nona Palmer; brother David Nelson; sister LaVere Andersen; sister Darlene (Nelson) Andersen; brother-in-law Irwin Andersen; brother-in-law Marvin Andersen.

Louene June (Nelson) Palmer born March 18, 1942 in Guthrie County to Harold and Frances (Williams) Nelson. She passed away on Monday, May 30, 2022 at Brookside Assisted Living in Montevideo, MN. Louene was a graduate of Wiota High School... View Obituary & Service Information

The family of Lou Palmer created this Life Tributes page to make it easy to share your memories.

Send flowers to the Palmer family.