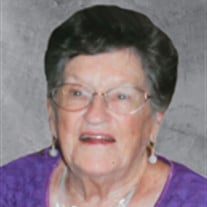 Loretta J. Doonan Petersen, daughter of Abner Earl and Gladys Olivia (Worden) Abel, was born September 4, 1922 in Silver City, Iowa. She was baptized into the Methodist faith and attended and graduated from Walnut Community Schools in Walnut, Iowa. In 1941, Loretta was united in marriage to Gaylord Doonan at the Monroe Methodist Church in rural Shelby County, Iowa. After their marriage, Loretta and Gaylord farmed 6 miles west of Elk Horn, Iowa for over forty-four years, where they raised their five children: Linda, Jane, Denise, James and Ann. While raising her kids and helping on the farm, Loretta was active in 4-H with her children and was a leader for the Monroe Merry Makers. In 1985, Loretta and Gaylord retired from farming but remained on the family farm until 1990 when they moved into Harlan. Gaylord died on December 1, 1994 and after his death, Loretta continued to make her home in Harlan. On April 11, 1998, Loretta was married to Arnold Petersen. She loved to travel and they spent lots of time seeing various parts of the world together. Loretta was a long time and active member at the Monroe Methodist Church. She was an excellent cook and enjoyed tending to her flower gardens. Loretta was a loving wife and mother and especially loved the time spent with her grandchildren, great grandchildren and great-great grandchildren. Loretta died on Thursday, July 25, 2019 at the Heritage House in Atlantic, Iowa, attaining the age of ninety-six years, ten months and twenty-one days. In addition to her parents, she was preceded in death by her husbands: Gaylord Doonan and Arnold Petersen; daughter Linda Ahrenholtz; son James Doonan and siblings Evelyn Abel, Kenneth Abel, Chester Abel, and Beverly Mohr. She is survived by her children: Jane and her husband Dean Fabian of Elk Horn, Iowa; Denise and her husband Dennis Juhl of Colorado Springs, Colorado and Ann and her husband Chuck Wolken of Harlan, Iowa; 15 grandchildren; 33 great grandchildren; 3 great-great grandchildren; sisters Bertha Purdum of Lenox, Iowa; Mary Bryant of Lenox, Iowa and Carol and her husband Jack Andersen of Manhatten Beach, California; sister-in-law Betty Abel of Creston, Iowa; nieces and nephews; other family members and friends.

The family of Loretta Doonan Petersen created this Life Tributes page to make it easy to share your memories.