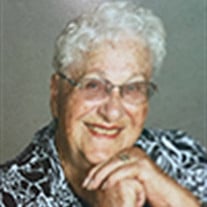 Loretta Eudene Rasmussen Baughman born January 25th, 1925 to John C and Ida Krueger Rasmussen in Lincoln Township Pottawattamie County, Iowa. Living 8 miles north of Walnut until 1936 when the family moved to the Tennant area, where she graduated from high school and was confirmed in the Shelby Lutheran Church. After graduation she kept house for her brother Marvin on his farm by Kirkman until her marriage to William Clarence Baughman on October 11, 1945 in San Diego, CA where Clarence was stationed in the U.S. Navy. They lived in San Diego until March of 1946, when Clarence was discharged from the Navy. They started farming 2 miles south and 1 ½ east of Kirkman, where son Gale was born October 7, 1946. They then bought a farm in 1948 and moved to Polk township 4 miles east and 2 south of Irwin, where daughter Faye was born on September 30, 1949. In February 1951 they sold that farm and purchased the farm ½ East and ½ South of Kirkman where they lived most of their life. Lynn joined the family on March 9, 1960. Loretta joined the Methodist church in Kirkman in 1951 and was a member of that church for many years. She was an active member of the Methodist women and taught 3rd and 4th grade Sunday school for 20 years. Loretta was a member of the Shelby County Women's farm Bureau and served as chairman during her membership. She was a Leader for the Douglas Dixes 4-H Club and County chair for 7 years. Loretta did extension work and was a member of the White Ribbon Society since 1946. Loretta's hobbies were her flowers, garden, yard, painting, sewing and was very proud of her Grand and Great Grandchildren. She enjoyed traveling with Clarence and being involved in many activities. She has enjoyed traveling south to Mesa, AZ where they purchased a home in Venture Out retirement community in 1982. She spent 35 happy seasons at Venture Out. When in Arizona Loretta was involved in many clubs and activities including square dancing, Sunday worship, bible study, shuffle board and bocce ball. She was always involved in something. Loretta’s spiritual like grew in her time in Arizona. The influence of the people in the Venture Out Community Church and the Breadburg family and others helped Loretta put her full trust in Jesus Christ as her Lord and her Redeemer. Loretta sought out a believers water baptism at the age of 86 when on May 1, 2011 in Omaha on her way back home to the farm from Arizona. Loretta continued to seek Christian fellowship when she was home in Iowa with the Immanuel Lutheran Church and Pastor Phil Nielsen who’s visitations at Elm Crest she looked forward to each week. Loretta was preceded in death by her parents, her brothers Lawrence and Marvin, grandson, Steven, husband Clarence and son Lynn. Surviving are son Gale and wife Judy Baughman of Omaha, NE. Daughter Faye and husband Richard Williams of Mesa, AZ. 6 grandchildren and 9 great grandchildren.

The family of Loretta E. Baughman created this Life Tributes page to make it easy to share your memories.

Send flowers to the Baughman family.