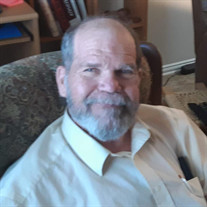 Lewis Wilson Kidd How do you measure a life? Is it the facts? Lewis Wilson Kidd. Born May, 1957. Died January, 2022. Married Evelyn Smith, 1983. Welcomed Joseph Smith Kidd to the family, 1984. Lived in Texas, Nebraska, and Iowa. Worked managing a donut shop, working in reservations with Marriott, and newspaper delivery among other things. Survived a kidney/pancreas transplant, followed by a second kidney transplant about a decade later. Lost most of his sight, and part of his leg. Lewis is survived by his son, Joe Kidd, of Des Moines, Iowa; his grandchildren, Darrin and Destiny Kidd, of Harlan, Iowa; his niece, Kim Brogan, of Harlan, Iowa; and his father, Harold Kidd, and sister, Mary Anna Kidd, of Abilene, Texas. Lewis is predeceased by his wife, Evelyn Smith Kidd, and his mother, Dorris Kidd. However, there was much more than that to Lewis Kidd’s life. He welcomed a series of foster kids and foreign exchange students into his home – many of whom still call him dad. He gave of his time and his hospitality over and over again. Lewis persevered. When he lost the majority of his sight – he retrained. When he lost part of his leg, he kept moving forward. During his final years in Harlan, Iowa, Lewis could be seen walking to the health center several days a week. He walked, even though he could neither see nor feel the ground under his feet. Lewis loved math, and dreamed of being a math tutor. Lewis loved speaking German. He spoke it any chance he got, and was thrilled when he got to travel to Germany as a translator. Lewis cared deeply about politics, and enjoyed nothing more than a logical, polite, political debate. There is no mathematical formula that can measure a life. A life is measured by the challenges conquered and endured. A life is measured by those left behind, and their memories. There will be an online memorial service to celebrate the life of Lewis Wilson Kidd at 2:00 p.m. CDT on Saturday, May 21, 2022. If you would like to participate in the memorial, and share your memories, email: [email protected] In lieu of flowers, the family is asking for donations to a fund for Lewis’ grandchildren, Darrin and Destiny Kidd. If you would like the link to donate to this memorial fund, email the address above.

The family of Lewis Wilson Kidd created this Life Tributes page to make it easy to share your memories.

Send flowers to the Kidd family.