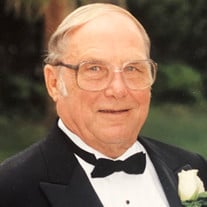 Lester Adolph Schmitz was born on February 7, 1927, to Bernard and Eleanor (Gubbels) Schmitz in Westphalia, Iowa. He was baptized, received his First Communion, and was confirmed at St. Boniface Catholic Church in Westphalia. He attended St. Boniface Catholic School and was a member of the graduating class of 1945. He was united in marriage to Rita Ellen Smith on November 24, 1953, at St. Mary’s Catholic Church in Portsmouth. Five children were born to this union: Greg, Jim, Peg, John, and Susie. After high school, Lester worked for the Shelby County Conservation District where he learned to become a good steward of the land. He moved to Portsmouth in the early nineteen-fifties and worked at the State Bank of Portsmouth. In 1965, he struck out on his own and founded Portsmouth Insurance Agency, working there until he retired in 1991. He was dedicated to serving the City of Portsmouth, working as a substitute rural mail-carrier for the post office, acting as the City Clerk for twenty-six years, and was a member of the Portsmouth Volunteer Fire Department since the early fifties. He served as Fire Chief in 1967-68. He was actively involved with the church, served as the head of finance for the annual parish picnic, and was a member of the Knights of Columbus. He also served as both an umpire and a coach for the Portsmouth baseball and softball leagues. Lester loved to garden, play cards, work puzzles, grill, and to travel. He visited all fifty states and multiple foreign countries. Lester spent the last eleven years in the Memory Care Unit at Elm Crest Senior Living Community where he received loving care from a wonderful staff. Lester died on October 10, 2019, at Elm Crest, having attained the age of ninety-two years, eight months, and three days. He was preceded in death by his loving wife of fifty-four years, Rita; his parents; his youngest daughter, Susie; brothers, Eugene, Eldred, and Lavern Schmitz; and sisters, Bernadette Conkel, Luella Hull, Luanna Schmitz, Marcelene Bissen, and Sr. Bernice Schmitz. He is survived by his children: Greg Schmitz (Barbara) of Dallas, Texas; Jim Schmitz (Alicia) of Chagrin Falls, Ohio; Peg Gaul (Tim) of Ames, Iowa; and John Schmitz (Kim) of Iowa City, Iowa; nine grandchildren, Christine, Amy, Ben, Abby, Jacob, Aaron, Andrew, Isabella, and Nicholas; and six great-grandchildren, Ava, Noah, Quinn, Hudson, Zachary, and Nicholas. He is also survived by his sisters, Arlene and her husband Bob Hodapp of Denver, Colorado; and Sr. Lorraine Schmitz of Milwaukee, Wisconsin; and his sister-in-law, Marge Madsen of Fort Collins, Colorado; along with other family members and friends.

Lester Adolph Schmitz was born on February 7, 1927, to Bernard and Eleanor (Gubbels) Schmitz in Westphalia, Iowa. He was baptized, received his First Communion, and was confirmed at St. Boniface Catholic Church in Westphalia. He attended... View Obituary & Service Information

The family of Lester Schmitz created this Life Tributes page to make it easy to share your memories.