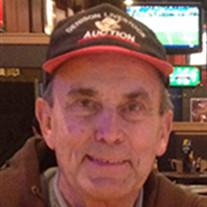 Leo Vincent Sonderman, son of Joseph and Kathryn (Wageman) Sonderman was born September 25, 1939 on the family farm near Defiance, Iowa. He was baptized and confirmed at St. Peter’s Catholic Church in Defiance, where he remained a lifetime member. After graduating from St. Peter’s Catholic School, Leo enlisted into the Army Reserves during the Vietnam War. Leo met Lois Soppe at the Star Lite Ballroom in Carroll, Iowa. They were united in marriage on July 8, 1967 at St. Lawrence. There were four children born to them: Stephanie, Jeff, Stacie, and Sara. Leo loved being the life of the party, frequenting Tobe's Place and The Lounge to play cards with his friends. He also had a ritual of going to the sale barn every Saturday morning in Denison as he did with his father growing up. You could often find Leo having morning coffee, walking laps around the football field, and reading the newspaper from cover to cover. Leo and Lois spent many hours and several dollars supporting the local casinos. One tradition Leo and Lois created for their family was going on a family vacation every summer. After Lois' passing, the tradition continued with close to 30 family members in one house. Leo was very proud of his children and was grateful for the compassion they had during his final months. His eyes lit up when his 14 grandchildren and 2 great grandchildren entered the room. He spent many hours watching and supporting their activities. Leo died on Saturday, October 2, 2021 at Salem Lutheran Home in Elk Horn, Iowa, attaining the age of eighty-two years and seven days. In addition to his parents, he was preceded in death by his wife Lois, siblings Harry Sonderman, James Sonderman, and Alice Kloewer. He is survived by his children Stephanie (Skip) Adams of Elkhorn, Nebraska; Jeff Sonderman (Betts Jones) of Harlan, Iowa; Stacie (Mike) Frederick of Earling, Iowa; Sara (Josh) Smothers of Grimes, Iowa; 14 grandchildren; 2 great grandchildren; siblings Marcy Powers of Defiance, Iowa; Pearl Schulte of Westphalia, Iowa; Mickey Kloewer of Defiance, Iowa; George Sonderman of Earling, Iowa; Jane (Jerry) Tremel of Dunlap, Iowa; brother-in-law Dick Kloewer of Englewood, Colorado; nieces and nephews; other family members; and friends.

Leo Vincent Sonderman, son of Joseph and Kathryn (Wageman) Sonderman was born September 25, 1939 on the family farm near Defiance, Iowa. He was baptized and confirmed at St. Peter&#8217;s Catholic Church in Defiance, where he remained a lifetime... View Obituary & Service Information

The family of Leo Sonderman created this Life Tributes page to make it easy to share your memories.

Send flowers to the Sonderman family.