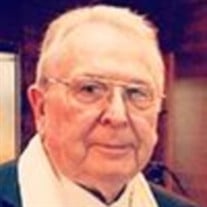 Leo Merle Hough (LMH), age 86, passed away peacefully in Omaha, Nebraska on January 20, 2022, at Bergan Mercy Hospital after a recent stroke event. Leo was born on September 1, 1935, in Council Bluffs, Iowa to Merle and Ethel (Owen) Hough. He graduated from Thomas Jefferson High School and later served in the United States Army Reserve for eight years. Leo married the love of his life, Margaret John on November 24, 1956, in Council Bluffs, Iowa. Early on, he worked for Wilcox Greenhouse, Sidles Automotive Store and later Pauley Furniture Store in Harlan, Iowa. The couple established and operated Leo's Harlan Flower Shop in Harlan, Iowa for over 17 years, where they raised their two children Tony and Liz. Leo was active in several civic organizations in Harlan including serving as the President of the Harlan Chamber of Commerce and helped lead the merger between the Harlan Economic Development Council and Chamber of Commerce. Leo was recognized by the State of Iowa for his efforts in attracting several businesses to Harlan and his involvement with the Iowa Main Street Program. Leo also served on the Harlan Community School Board and the Myrtue Memorial Hospital Board of Directors. In 1988, Leo was recruited to work for the Iowa Department of Economic Development in Des Moines, Iowa where he served for over a decade. As a result, the Hough's sold the flower shop and moved to Urbandale, Iowa. In the early 2000's, Leo retired from the State of Iowa but soon returned to the workforce to assist Drake University with a fund-raising project that renovated the Drake football stadium and track. Later, when Terry Branstad returned as Governor in 2011, he tapped Leo to work as the "chief troubleshooter" in his Capitol office. Leo served in this position until his final retirement in 2017. In 2021, Leo and Margaret moved to Fremont, Nebraska, to be closer to their children, grandchildren, and great grandchildren. Leo was a loving husband, father, brother, uncle, brother-in-law, grandfather, great grandfather, and friend to many. He was a man of integrity and quiet strength. He possessed a tremendous work ethic and always strived to make his community a better place to live. Leo was frequently the sharpest dressed guy in the room. He enjoyed traveling with Margaret to visit friends and family as well as his frequent fishing trips to Canada with his Harlan buddies. Leo was an avid car buff and he loved outdoor gardening and landscaping design. Leo was preceded in death by his parents Merle and Ethel, his sister Jeanette (Hough) Campbell and brother Larry Hough. He is survived by his wife, Margaret of Fremont, Nebraska, son Tony (Sue) Hough of Harlan, Iowa; daughter Liz (Geoff) Hall of Fremont, Nebraska; granddaughters Lindsey (Israel) Monteiro of Boca Raton, Florida; Michelle Hall (Franky Contreras) of Chicago, Illinois; grandsons Nick Hall (Kiley) of Omaha, Nebraska; Anthony Hough of Clive, Iowa; Nicholas Hough of Omaha, Nebraska; sister Lorraine (Darrell) Nation of Council Bluffs, Iowa; 5 great-grandchildren and several nieces and nephews. Arrangements will be handled by Pauley Jones Funeral Home in Harlan, Iowa. In lieu of flowers, memorials can be made to the L.M.H. Foundation (for community betterment). Visitation with the family at the funeral home will be Friday, January 28, 2022, from 5:00 p.m. - 7:00 p.m. A Celebration of Life ceremony is set for Saturday, January 29, 2022, at 10:30a.m. at the Pauley Jones Funeral Home, with a luncheon to follow from 11:30 a.m. to 2:00 p.m. at the Harlan Golf and Country Club.

The family of Leo Hough created this Life Tributes page to make it easy to share your memories.

Send flowers to the Hough family.