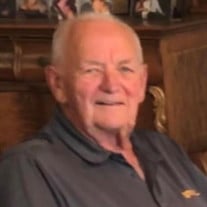 Leo James Goeser, son of Bruno and Mildred (Weiland) Goeser was born March 13, 1933 in Defiance, Iowa. He was baptized and confirmed at St. Peter’s Catholic Church in Defiance. He attended school at St. Peter’s Catholic School. After graduation, he enlisted into the United States Army. He went to barber school in Des Moines, Iowa. On June 29, 1953, Leo was united in marriage to Mary Jane Schleier at St. Peter’s Catholic Church. Three children were born to this union: Stephen, Patricia, and Nancy. Leo served the Harlan Community as a barber for 64 years. He was a long time usher and devout parishioner at St. Michael’s Catholic Church in Harlan. Leo was an avid golfer, big fan of Yankee baseball, and a continued supporter of the Harlan Cyclones. He was a member of the football chain gang for 35 years before stepping down to allow someone else to enjoy the fun. Leo died on Thursday, March 25, 2021 at Jennie Edmundson Hospital in Council Bluffs, Iowa, attaining the age of eighty-eight years and twelve days. In addition to his parents he was preceded in death by his siblings Frank Goeser, Paul Goeser, and James Goeser. He is survived by his wife Janie Goeser of Harlan, Iowa; children Stephen Goeser and his wife Brenda of Omaha, Nebraska; Patricia and her husband Michael Rzewnicki of New Smyrna Beach, Florida; Nancy and her husband Curtis Bell of West Des Moines, Iowa; 8 grandchildren; 8 great grandchildren; siblings Edward Goeser and his wife Marilyn; John Goeser; Mary Griffin; Theresa and her husband Lawrence Fedewa; Alice Goeser; Larry Goeser; sisters-in-law Debbie Goeser; Janet Goeser; nieces and nephews; other family members and many friends. Leo was saved by CPR and “his Angel” and many staff at Myrtue Medical Center, he was given extra years of life. Memorial contributions may be made to Shelby County Health Foundation or St. Michael’s Catholic Church in Harlan on his behalf. We knew he was beloved but the outpouring of stories has been heartwarming. Everyone has at least one Leo story! We are so blessed that he got to be a part of the community and do what he wanted right up until the end. No Services are being held at this time. Cards may be sent to one of the following addresses: Steve and Brenda Goeser 17703 Jones St Omaha NE 68118 Mike and Patti Rzewnicki 304 Leoni Street New Smyrna Beach FL 32168 Curt and Nancy Bell 4720 Colt Drive West Des Moines IA 50265 Janie Goeser Hansen House 703 Dye St Harlan, IA 51537

The family of Leo James Goeser created this Life Tributes page to make it easy to share your memories.

Send flowers to the Goeser family.