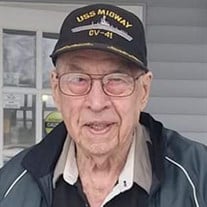 Lawrence Eugene (Gene) Bergman, son of Nels and Ida Bergman, was born May 1, 1927 in Hayes Township in Ida County, Iowa. He attended school in Ida Grove and graduated with the class of 1945. He was the youngest of 8 children with the next oldest sibling being 9 years older. He was the baby of the family and was spoiled with lots of love. The summer between his Junior and Senior year he ventured out to California, where he found employment at McDonnell Douglas. He fortunately had two sisters and one brother to provide him housing while in California. After working the summer at McDonnell Douglas, he returned home to finish and graduate from high school. After highschool, he enlisted in the United States Navy as a Navy Airman, 3rd Class PO during World War 2. He was stationed on two aircraft carriers, the Roosevelt and Midway. Gene took pride in serving his country. In his later years, he was invited to Washington, DC with other Veterans. It was during World War 2 when he hitchhiked across the country numerous times, from Virginia to California and back. Military soldiers could also fly for free if they had their parachute and navy bag. After the war ended Gene returned home and was hitching a ride to Odebolt. It was during this time that Herman Knief picked him up and gave him a ride as far as Herman’s house. Who would have known that within a short time Herman would become Gene’s father-in-law. Gene married Gloria Ann Knief, the love of his life, on October 30, 1949. In 1959 they were blessed with a daughter, Kimberly, followed by a son, Craig, in 1962. Gene and Gloria did everything together. They were a true love story. When out and about, they could often be seen holding hands. Gene and Gloria delivered the Sioux City Journal papers to numerous towns every morning, departing their home around 3A.M. After the papers were delivered, Gene would go off to a construction job, building and remodeling houses. He was a general contractor and was proud of the many homes he built in the Kiron and Denison area. He always said he would rather pound a nail with a hammer than play a round of golf. He also was a circulation manager for the Sioux City Journal for over 20 years, where he was in charge of carrier boys whom he mentored. He would leave a positive impression to all who met him. Gene loved traveling the country and abroad with Gloria. They did lots of camping and went on several trips with family and friends. For over 25 years, they enjoyed the warm winters in Florence, Arizona. Gene loved people, loved to laugh, enjoyed playing cards, had fun trying his luck at the casino, fishing, making wine, making horseradish, and so much more. Gene watched the grandkids play sports with pride. He was quite the cheerleader! Gene and Gloria were blessed to have so many friends. Gene was Mr. Social. He loved to talk and visit with anyone and everyone. He could always keep the conversation going and going and going. He had a strong faith in God and Jesus and loved his church, Bethel Lutheran. He and Gloria were so proud of their children, grandchildren, and great grandchildren. Gene passed away on January 20, 2021 at Crawford County Memorial Hospital at the age of 93. He is proceeded in death by his wife, Gloria Bergman, his parents (Nels and Ida Bergman), his siblings (Floyd Bergman, Isabell Meltesen, Elsie Lewis, Ione Seaberg, Donald Bergman, Doris Donaldson, and Carl Bergman) and numerous other family members and friends. Those left to Cherish his memory include daughter Kim and husband Jay Heiden of Denison, son Craig and his wife Diane Bergman of Pasadena, California; grandchildren Brandon and wife Sarah Bergman of Jacksonville, Florida; Amber and fiancé Art Gonzalez of Benbrook, Texas; Kyler Conn and fiancé John Croskrey, of Seattle, Washington; Conrad and wife Rebecca Heiden of Denison,; Jacob Heiden and special friend Katie Hudson of Iowa City; Jaden Heiden, of Iowa City; and great grandchildren Evelyn and Olivia Bergman of Jacksonville, Florida. Craig, Kim, and their families invite everyone to the Kiron Memorial Park Saturday, July 3rd, for Gene and Gloria’s Celebration of Life. It will begin around 10 A.M. and continue throughout the afternoon (There is no set program, so feel free to come anytime that works).

Lawrence Eugene (Gene) Bergman, son of Nels and Ida Bergman, was born May 1, 1927 in Hayes Township in Ida County, Iowa. He attended school in Ida Grove and graduated with the class of 1945. He was the youngest of 8 children with the next... View Obituary & Service Information

The family of Lawrence Eugene Bergman created this Life Tributes page to make it easy to share your memories.

Send flowers to the Bergman family.