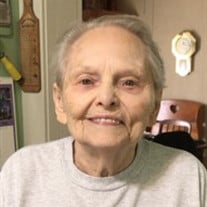 Lavonne Pearl (Comstock) Bargenquast, daughter of William and Eva (Burger) Comstock, was born on October 24, 1925 in Tennant, Iowa. She attended grade school in Kirkman, Iowa and in Hastings, Nebraska. Lavonne met Leo Bargenquast in the late 1930s when they were both going to school in Kirkman, Iowa. Years later while Leo was on leave from the Navy, they met again at Paxton drug store in Harlan, Iowa while they were both waiting for the same bus to go to Omaha. They sat together on the bus going to Omaha and two weeks later, Leo sent a letter to LaVonne asking her to marry him. They were united into marriage at the Algiers Naval Station in New Orleans by the Navy Chaplain and in the presence of over 200 sailors on May 29, 1945. To this union five children were born: Dennis (who was deceased in infancy), Cheryl, Gary, Connie and Linda. After Leo was discharged from the Navy in October 1945, they moved to Kirkman, Iowa and then to Irwin, Iowa while Leo was working for Purina Feed Store in Irwin. In 1953, they relocated to a farm outside of Avoca, Iowa. In 1969 they moved in town to Avoca and have lived there ever since. "Shorty" (which was Lavonne's nick name), was a woman of many talents and skills: making rugs, quilting, canning, embroidery, a seamstress, baking, cooking, gardening and bowling to name a few. She had a gentle heart and adored her children, grandchildren and great grandchildren. Lavonne passed away on Tuesday, August 11, 2020, at Myrtue Medical Center while on comfort care having attained the age of ninety-four years, nine months and eighteen days. She was preceded in death by her parents; son Dennis; son-in-law Richard Crawley and brothers Robert and Ronald Comstock. Left to cherish her memories are her loving husband of seventy-five years Leo Bargenquast of Avoca, Iowa; children Cheryl (Lyle Jr.) Hamrick of LaVista, Nebraska; Gary (Ruangkaew) Bargenquast of Chiang Rai, Thailand; Connie Crawley of Glenwood, Iowa; Linda (Rob) VanWey of Liverpool, New York; 10 grandchildren; 12 great-grandchildren; nieces and nephews, other family and friends.

The family of Lavonne Pearl Bargenquast created this Life Tributes page to make it easy to share your memories.

Send flowers to the Bargenquast family.