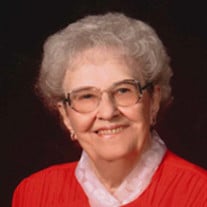 Lavina Rose Gross, daughter of August and Mary (Schneider) Kaufman was born September 13, 1921. She was baptized and confirmed at St. Boniface Catholic Church in Westphalia, Iowa. She attended St. Boniface School, where she graduated from the 8th grade. On October 8, 1940, she was united in marriage to Alban Gross at St. Boniface Church in Westphalia. They lived on the family farm outside of Earling. She was an avid gardener and a talented seamstress. She made dresses for her daughters and shirts and slacks for her sons and husband. Lavina was a fabulous cook and baker. Many of her recipes are printed in the Earling and Westphalia cookbooks, like her favorites chicken and rice, and peach pie. Lavina was very involved in her church and community. She served as Eucharist Minister, was a member of the Altar Society, serving as President. She was a member of the Catholic Daughters of America #266 Earling for many years. Lavina loved to dance and frequently attended dances in which Alban would play for the Earl Russell Orchestra. She also loved playing cards, especially euchre. She spent many evenings playing cards with friends and at Little Flower Haven, where she became a resident in 2015. She was the last resident there before moving to the Hansen House in Harlan in 2019, where she died on Saturday April 17, 2021 attaining the age of ninety-nine years, seven months, and four days. In addition to her parents, she was preceded in death by her husband Alban, daughter Mary Ann Lapke, son Damian Gross, grandson Chad Erlbacher, son-in-law Tom Leuschen, brothers Tony Kaufman, Al Kaufman, Gus Kaufman, Jerry Kaufman, sisters Francis Foxhoven, Marie Monahan, Geraldine Dixon, Nottie Gross, and Alice Wegner. She is survived by her children Joan (Bill) Erlbacher of Earling, Iowa; Kathy (Mike) Laumann of Flower Mound, Texas; Duane (Liz Kearney) Gross of Omaha, Nebraska; Dean Gross of Cedar Rapids, Iowa; Declan (Gayla) Gross of Earling, Iowa; David Gross of Des Moines, Iowa; Jeanne (Tom) Filbey of Papillion, Nebraska; 27 grandchildren; 46 great grandchildren; 3 great-great grandchildren; son-in-law Ed Lapke of Dunlap, IA; many nieces and nephews; other family members and friends.

Lavina Rose Gross, daughter of August and Mary (Schneider) Kaufman was born September 13, 1921. She was baptized and confirmed at St. Boniface Catholic Church in Westphalia, Iowa. She attended St. Boniface School, where she graduated from... View Obituary & Service Information

The family of Lavina Rose Gross created this Life Tributes page to make it easy to share your memories.

Send flowers to the Gross family.