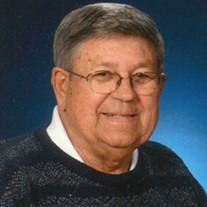 LaVerne LeRoy "John" Schuning, son of Lloyd and Ella (Neve) Schuning, was born on June 14, 1935 in Avoca, Iowa. He was baptized and confirmed at Trinity Lutheran Church in Avoca, Iowa. He attended school in Avoca. At age 17, he left high school and joined the U.S. Army during the Korean conflict. He spent 14 months in Korea and achieved the rank of Staff Sargent. After discharging from the Army and returning home to Avoca, he began driving truck for the Alfalfa Mill and Schueman Brothers, among various other jobs. On August 7th, 1959, John was united in marriage to Doris Niklasen at Bethany Lutheran Church in Kimballton, Iowa. To this union three children were born: Janelle, Craig, and Trent. In 1961, the family moved to Harlan, Iowa, where Doris continued her teaching career and John began working for the Nishnabotna Valley REC. In 1973, John opened his own electrical business in Harlan, Schuning Electric, which he operated it until 1984. He then became employed with Farmers Mutual Cooperative Telephone Company, from where he retired in 1993. On April 1, 1993, John was diagnosed with inoperable lung cancer. After months of treatment, he was informed that he was cancer free, and was called a "walking miracle". The family was blessed with an additional 26 wonderful years with John. John was very active in the Harlan community. He was an active member, followed by honorary member, of the Harlan Fire Department. He served on the Veteran's Memorial Commission Board, was a past Masonic member and also a past member of the Harlan Shrine Club, and served in the Iowa National Guard. John was a member of the American Legion Post #150. He was active as the chairman for the American Legion fireworks committee for over 25 years. Doris and John were extremely active for over 20 years in the American Cancer Society, served on the American Cancer Board, and were instrumental in the startup of the cancer support group at the Harlan hospital as well as bringing the Relay for Life to Shelby County. John volunteered with Road to Recovery and drove many patients to their treatment appointments. He was a member of Immanuel Lutheran Church in Harlan. John's commitment to the community did not go unnoticed. He received the honors of Shelby County Chamber of Commerce Citizen of the Year in 2001 and FMCTC Hometown Hero in 2004. John kept busy with family, friends, and hobbies. Family was a big part of John's life. He enjoyed his grandchildren tremendously. His favorite way to spend his time included attending his grandchildren's programs, games, concerts, and various other activities. John and Doris often traveled to Texas, where they spent time with friends and made many new ones. He never met a stranger. John enjoyed attending daily Burger King coffee club. He was an avid collector of NASCAR, Texaco, and sports memorabilia. John passed away on Friday, August 9, 2019, at Methodist Jennie Edmundson Hospital in Council Bluffs, Iowa, having attained the age of eighty four years, one month, and twenty six days. He is preceded in death by his wife, Doris; parents Lloyd Schuning and Ella Osbahr; and three sisters: Jacqueline Page; Carol Schneider; and Bonnie Jean Damgaard. He is survived by his children: Janelle and her husband Kurt Musfeldt of Harlan, Iowa; Craig Schuning and his wife Karla of Shawnee, Kansas; and Trent Schuning and his wife Traci of Portsmouth, Iowa; five grandchildren: Chelsea Musfeldt; Thane Schuning and his wife Nicole; and Taylor, Tifani, and Taryn Schuning; one great-granddaughter: Gwendolyn Schuning; his four sisters: Donna Hansen of Harlan, Iowa; Karen Pope of Avoca, Iowa; Diana and her husband Dennis Taylor of Avoca, Iowa; and Debbie and her husband Jerry Stendrup of Harlan, Iowa; his two brothers: Steve Osbahr and his wife Rita of Avoca, Iowa; and Larry Osbahr and his wife Connie of Arvada, Colorado; his special friend: Sally Bugge of Council Bluffs, Iowa; nieces, nephews, other family members, and many friends. He will be missed by everyone who knew and loved him.

LaVerne LeRoy "John" Schuning, son of Lloyd and Ella (Neve) Schuning, was born on June 14, 1935 in Avoca, Iowa. He was baptized and confirmed at Trinity Lutheran Church in Avoca, Iowa. He attended school in Avoca. At age 17, he left high school... View Obituary & Service Information

The family of LaVerne John Schuning created this Life Tributes page to make it easy to share your memories.

Send flowers to the Schuning family.