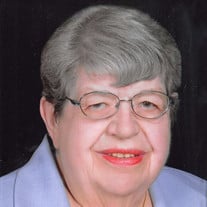 Lauretta Catherine Kenkel, daughter of William and Anna (Wingert) Kenkel, was born August 14, 1935 in Panama, Iowa. She was baptized and confirmed at St. Mary’s of the Assumption in Panama, where she remained a life time member. She attended grade school and high school at St. Mary’s School in Panama where she graduated with the class of 1953. After High School, Lauretta received her certificate as a Registered Nurse through Mercy Nursing Training in Council Bluffs, Iowa in 1956. Lauretta then went on to work as a Psychiatric Nurse at the Veteran’s Hospital in Knoxville, Iowa for thirty-five years. This was her first and last job until her retirement on January 1, 1991. While a nurse, Lauretta was honored as the Nurse of the Year in 1979 and was inducted into the Who’s Who of Nursing in 1988. While living in Knoxville, she was an avid bowler and enjoyed playing golf. Upon her retirement, Lauretta returned to Panama where she built a new home that she designed herself. Lauretta was an active member of both St. Anthony’s Catholic Church in Knoxville and St. Mary’s in Panama where she served on the Parish Council, Liturgy Committee as well as a Eucharistic Minister. She taught ceramics, painting, sewing and quilting where she was an active member of the Panama Sewing Circle. She enjoyed quilting, making quilts for all her nieces and nephews and some great nieces and nephews. She also helped with all the nieces and nephews wedding flowers and corsages. She loved to travel and go sight seeing throughout the United States, Europe and South America. On July 8, 2020, she moved to Elm Crest Retirement, where she died on August 6, 2021, attaining the age of eighty-five years, eleven months, and twenty-three days. In addition to her parents, she was preceded in death by her brother Michael Kenkel, and infant sisters Mary and Anna Kenkel, sister-in-law Patricia Kenkel. She is survived by her brother Fr. Leonard Kenkel of Harlan, Iowa; sister-in-law Patricia Kenkel of Chicago, Illinois; sister Sr. Sylvia Kenkel OSB of Atchinson, Kansas; brothers Sylvan (Joyce) Kenkel; David (Joyce) Kenkel, Damian Kenkel, Eugene (Patricia Jane) Kenkel all of Panama, Iowa; many nieces and nephews; other family members and many friends.

Lauretta Catherine Kenkel, daughter of William and Anna (Wingert) Kenkel, was born August 14, 1935 in Panama, Iowa. She was baptized and confirmed at St. Mary&#8217;s of the Assumption in Panama, where she remained a life time member. She... View Obituary & Service Information

The family of Lauretta Catherine Kenkel created this Life Tributes page to make it easy to share your memories.

Send flowers to the Kenkel family.