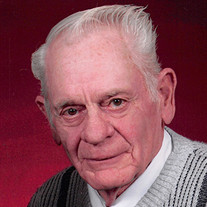 Larry Lee Knudson, son of Henry Mayer Knudson and Velma Georgia (Andresen) was born October 13, 1938 in Manning, Iowa. He attended rural schools near Manning and Vail, he graduated from Irwin, Iowa in 1957. He farmed for himself after graduating until he enlisted in the U.S. Army. He proudly served our country from December 12, 1961 until September 13, 1963. During this time, he was honored to be chosen for the honor guard for President candidate Robert F. Kennedy. Larry was a lifelong member of St. Paul's Lutheran Church in Irwin. On March 12, 1966, he was united in marriage to Judith “Judy” Benoit of Harlan, Iowa. To this union, 3 children were born: Bradley Mayer, Brenda Lee, and Brian James. They farmed near Redline and Vail, Iowa until 1972, when they bought the Andresen home place from his parents near Irwin, Iowa. He raised Purebred Black Angus cattle, hogs, and farmed the land. After he retired from farming, he worked several years for Roger Ahrenholtz and then worked for Wilson Genetics in Harlan, Iowa. At Wilson's, Larry was a research technician and enjoyed every aspect of the seed corn industry. Because Larry wasn't already busy enough, he and Bob Smith decided to get an auction place started in Irwin and they named it the K & S Auction Corral. It became very successful as they would have household to machinery sales. Larry was a lifelong 4-H member, in his youth as well as being a 4-H leader and 30 plus year member of the Shelby County Fair Board. He was inducted into the Shelby County 4-H Hall of Fame and received the 4-H alumni award for supporting all 4-Hers. He and Charlie Obrecht started the Open Class Cattle show that is still going strong after 40 years. He enjoyed telling stories, reminiscing about the good ole days, woodworking, fishing, hunting, dancing, whistling, and helping friends and neighbors get their crops in and out during harvest, and helping anyone that needed it. Larry was a caring, gentle man, with a huge heart. He was a member of the Greenridge Steam & Gas Engine Club of Irwin, the Old Iron Club of Manning, the Botna Valley, Denison, and American Angus Associations. Larry’s most prized possessions were his faith, family, grandchildren, great granddaughter, his Angus cattle, John Deere tractors, '55 Ford blue pickup, and all of his antiques and chicken house "collectibles". Larry died on Saturday, October 16, 2021 at Accura Healthcare in Manning, attaining the age of eighty-three years and three days. He was preceded in death by his parents Velma and Mayer, his brother Lyle, parents-in-law Harold and Alice, and his nephew Chad Benoit. He is survived by his wife Judy of 55 years; children Bradley of Irwin, Iowa and his special friend Deb Klocke ; Brenda and her husband Dan Hansen of Kimballton, Iowa; Brian of Irwin; 6 grandsons; 1 great granddaughter Nevaeh Claire; sister Linda (Jerry) Wigness of Texas; nieces and nephews; in laws Jamie and Margie Benoit; Lanny and Lois Benoit, all of Creston; Wendy & Roger Schuett of Estes Park; many friends and his furry companion dog Bo.

Larry Lee Knudson, son of Henry Mayer Knudson and Velma Georgia (Andresen) was born October 13, 1938 in Manning, Iowa. He attended rural schools near Manning and Vail, he graduated from Irwin, Iowa in 1957. He farmed for himself after graduating... View Obituary & Service Information

The family of Larry Lee Knudson created this Life Tributes page to make it easy to share your memories.

Send flowers to the Knudson family.