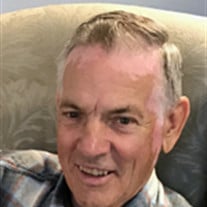 Larry Dent Axland, son of Clifford and Inona (Dent) Axland, was born on April 28, 1938 at his family’s home near Irwin, Iowa. He attended grade school in Irwin and graduated from Irwin Kirkman High School. On August 9, 1959, Larry was united in marriage to Bonnie West at St. Paul’s Lutheran Church in Irwin. Four children were born to this union: Lance, Carmen, Tim, and Jill. Larry farmed outside of Manilla, Iowa until retiring in the early 1990's. He also raised holstein bucket calves. After his retirement, he went to work at Farmland in Denison. Larry and Bonnie enjoyed trips to Minnesota to relax outdoors and at the lake. Larry also enjoyed gardening and traveling to Canada on his fishing trips. Larry died surrounded by his loving family on Wednesday, August 21, 2019 at the Hansen House in Harlan, Iowa, attaining the age of eighty-one years, three months, and twenty-four days. In addition to his parents, he was preceded in death by his wife Bonnie and brother Jerald Axland. He is survived by his children Lance Axland of Irwin, Iowa; Carmen and her husband Randy Rasmussen of Jacksonville, Iowa; Tim Axland and his wife Connie of West Des Moines, Iowa; Jill and her husband John Plagman of Corley, Iowa; 16 grandchildren; 19 great grandchildren; brother Dean Axland and his wife Sharon of Nevada, Iowa; sister-in-law Dwanna Axland of Council Bluffs, Iowa; nieces and nephews; other family members and friends.

Larry Dent Axland, son of Clifford and Inona (Dent) Axland, was born on April 28, 1938 at his family&#8217;s home near Irwin, Iowa. He attended grade school in Irwin and graduated from Irwin Kirkman High School. On August 9, 1959, Larry was... View Obituary & Service Information

The family of Larry Dent Axland created this Life Tributes page to make it easy to share your memories.

Send flowers to the Axland family.