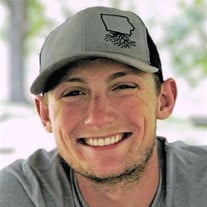 Kivin Michael Francis Peck was born on April 22nd, 1998 at 10:23am to Kivin & Julie Peck in Council Bluffs, IA. Where he lived & attended Kreft Elementary until moving to Walnut, IA in 2005 where he attended Walnut Community Schools through the transition to AHST as well as the transition to AHSTW where he graduated in May of 2016. Immediately after graduating, Kivin picked up a job at the Scoular Elevator in Hancock and worked for the next 3 years, proving how hard of a worker he was, day in and day out. Kivin found a new opportunity to expand his knowledge and skills and became a member of the local Laborers Union 1140 where he works for the Mortenson Co in the Civil Branch. Kivin's hard work paid off, once again when he was accepted into the Ironworkers Union Local 21 where he would follow his father's footsteps. At a very young age, Kivin showed his love & interest for trucks & bikes which grew into nothing but pure love & passion more and more as the years went by. You could always count on Kivin to be doing something to "get the look" or draw some attention. It was like Christmas, at least once a week, when his mom, Julie, would pick up the mail or come home to see boxes, but they always had Kivin's name on it. She then questioned Kivin and asked when it would be her turn! Kivin was quick to make a smart remark back and say - "maybe next time, but it might get here quicker if you order something". If you didn't find Kivin working, making his Truck and Bike look fancy, or chasing girls, you'd find him in the gym lifting weights and sending his famous "tanning bed" pictures. Kivin was one to push himself and his peers harder and harder every training session. He would always set goals for himself, and he would do anything and everything he could to make it happen. He had set a personal goal for himself to deadlift 500lbs, which he surpassed less than 2 weeks ago. Kivin Michael had a smile that was contagious, warming and full of life that could light up the room whenever he walked in. Kivin was a self-made, hard working man who always worked very hard for everything he had. All his hard work finally paid off when he was able to purchase a Brand New 2017 GMC 4x4 Sierra and his 2016 Harley Davidson Street Glide - and they were his pride and joy. Kivin was so full of life with his dynamic personality and his legacy will live on forever. So many of us were beyond blessed to have the time to make the memories that we could with Kivin that we will cherish forever. Kivin died on April 4, 2021 as the result of a motorcycle accident in Minden, Iowa having attained the age of twenty-two years, eleven months and thirteen days. He was preceded in death by his maternal grandparents, Leo and Mary Embree and his paternal grandfather, Rex C. Peck. Kivin is survived by his parents: Kivin Sr. and Julie Peck of Walnut, IA; siblings: Billy Peck & son Carter of Omaha, NE; Sunnie Jo Peck & son Ryker of Omaha, NE; Rikki Jo Peck of Walnut, IA and Katherine “Ali” Peck of New Jersey;paternal grandmother Maria Peck of Walnut, IA; aunts and uncles Kathy and Jeff Forde of Texas; Kim and Derral Tibbets & children of Texas; Ron and Pat Embree of Arizona; Michelle Embree of North Carolina; Nancy and Matt Lyne of Texas; cousins Dillon Forde & daughter Ryleigh of Walnut, IA and Dezaray (Travis) Forde & children Hayvin and Rhyatt of Casey, IA; close friend Tehya Christensen of Texas other relatives and many friends. Kivin Michael, your wings were ready, but our hearts were not. This is not a good-bye, but a see you later.

Kivin Michael Francis Peck was born on April 22nd, 1998 at 10:23am to Kivin & Julie Peck in Council Bluffs, IA. Where he lived & attended Kreft Elementary until moving to Walnut, IA in 2005 where he attended Walnut Community Schools through... View Obituary & Service Information

The family of Kivin Michael Peck, Jr. created this Life Tributes page to make it easy to share your memories.

Send flowers to the Peck family.