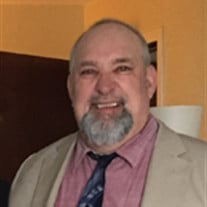 Kevin Eugene Krohn, son of Ronald Eugene and Normalee (Bartholomew) Krohn was born September 15, 1958 in Harlan, Iowa. He was the youngest of 3 children, having to “lovingly endure” two older sisters, which may have contributed to him becoming an ornery little kid growing up! But that orneryness and energy developed into an ability to make lots of good lasting friendships in his life. He always loved fishing, go karts, dismantling things, and his parents also kept him busy with 4-H, cub scouts and farm chores. However, Kevin disliked farm chores and disliked green beans even more! Somewhere in his adult life, someone called him Hoss, and that handle stuck for good, even seen in 12" letters on the front of his stock car. Fishing stayed a favorite, and then camping at Lake View with Vicki, and more special friendships. Hoss got back into motorcycles, ending up with Ol’ Blue, his Harley Road Glide and the highways became a new love. In recent years, after his retirement he still enjoyed some rock and roll music, got into paperbacks, and old westerns and shows on METV. But it was mostly simple pleasures; friendships, a good joke, and being there for others. Hoss and his mom became best buddies in the last couple years while checking in on each other, conversations, and driving to various appointments, usually coordinated with pie at Village Inn! Hoss will be deeply missed by his survivors: his mother Normalee Krohn of Avoca, Iowa; former wife Vicki Krohn of Harlan, Iowa; sisters Caleen (Patrick) Pagel of Muscatine, Iowa, and Cathy (Tim) VanDenBerg of Waterloo, Iowa; nephew Eric (Alexandra Bielec) Pagel of St. Paul, Minnesota; nieces Emmy (David) Foster of Las Vegas, Nevada, and Mackenzie (Dalton) Wrage of Rochester, Minnesota; many special friends, both human and 4-legged. We believe Hoss would want us to remember him for his giving nature, love for family and friends, and his big beautiful laugh.

Kevin Eugene Krohn, son of Ronald Eugene and Normalee (Bartholomew) Krohn was born September 15, 1958 in Harlan, Iowa. He was the youngest of 3 children, having to &#8220;lovingly endure&#8221; two older sisters, which may have contributed... View Obituary & Service Information

The family of Kevin Eugene Krohn created this Life Tributes page to make it easy to share your memories.

Send flowers to the Krohn family.