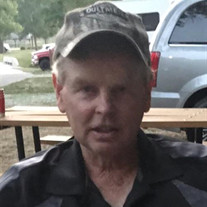 Kent Allen Morgan, the son of Victor and Barbara (Janssen) Morgan was born on March 6, 1957 in Davenport, Iowa. Soon after, he moved to a farm in rural Harlan. Kent started helping his dad farm at a very young age. When he was seven, Kent began driving tractors on the farm. Farming was in his blood. Kent went through the Harlan school District where he excelled at wrestling. He graduated from Harlan High School in 1975. Kent married his high school sweetheart, Deb Martens, on July 9, 1977. They gave birth to three wonderful children: Jason, Amber, and Holly. Kent continued to farm through his adult life, and he loved it. Early on he raised hogs and cattle, but he transitioned into growing beans and corn. Farming was a contributing factor to his love for animals. Kent would spoil dogs and cats, even if they weren’t his. He liked to take care of animals. Kent also liked to watch football, cheering for the Green Bay Packers every week they played. He enjoyed old vehicles and machinery, history, and westerns on TV. But Kent’s biggest joy was his family. He loved doing things with his kids and grandkids like going fishing, playing games, and having a bowl of ice cream with chocolate and peanuts on top. And his wife Deb was his world. He was not a fan of flowers, but he loved to do the landscaping in their yard the way that Deb liked it. On Tuesday, September 29, 2020, Kent passed away at Myrtue Medical Center in Harlan at the age of sixty-three years, six months, and twenty-three days. He was preceded in death by his parents. Those left to cherish his memory include his wife Deb Morgan of Harlan, Iowa; children Jason Morgan of Des Moines, Iowa; Amber Schmitz and her husband Matt of Harlan, Iowa; and Holly Buckingham and her husband Tyler of Adel, Iowa; grandchildren Eli and Ben Schmitz; and Isla, Ezra, Tilly, and Henry Buckingham; sisters Karen Fordyce of Omaha, Nebraska; and Kathy Lee of Austin, Texas; father-in-law Stanley Martens of Portsmouth, Iowa; brothers-in-law Steve Martens and his wife Brenda of Nashville, Tennessee; Terry Martens and his wife Debbie of Ames, Iowa; and Lynn Martens and his wife Diane of Portsmouth, Iowa; and many nieces, nephews, cousins, and friends. In lieu of flowers, memorial contributions can be made in Kent’s honor to: Midlands Humane Society 1020 Railroad Avenue, Suite A Council Bluffs, Iowa 51503

Kent Allen Morgan, the son of Victor and Barbara (Janssen) Morgan was born on March 6, 1957 in Davenport, Iowa. Soon after, he moved to a farm in rural Harlan. Kent started helping his dad farm at a very young age. When he was seven, Kent began... View Obituary & Service Information

The family of Kent Allen Morgan created this Life Tributes page to make it easy to share your memories.

Send flowers to the Morgan family.