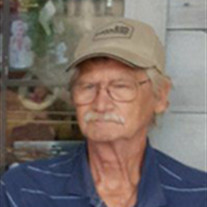 Kent Clarence Frieze, the son of Clarence Wilber and Louise Emma (Moreland) Frieze, was born on May 17, 1947 in Council Bluffs, Iowa. While growing up a momma’s boy, he attended Longfellow Elementary School in Council Bluffs and was a member of the Southside Christian Church. Kent went on to attend Auto Mechanics and Body Shop School in Omaha, Nebraska. He later was baptized in a pond on February 15, 1984 through the Pisgah United Pentecostal Church. Kent married Juanita Jean Pruet on February 9, 1970 in Omaha, Nebraska. He worked at a grain elevator as a mechanic and also at various auto body shops during his career. He also worked for the Laidlaw Bus Company as both a driver and mechanic. He loved going to BINGO with his sister and nieces. He was a simple man who loved his kids and grandkids more than anything else. Kent died April 13, 2021 at his residence in Council Bluffs, Iowa having attained the age of seventy-three years, ten months and twenty-seven days. In addition to his parents Clarence and Louise, he was preceded in death by his wife Juanita, sisters Virgina DeBoldt, Lavina Robinson, Violet Malone, Darlene Walker, Gloria Christianson, Lucy Frieze, Dorthy Frieze and brothers Larry Frieze, Rachie Frieze, and Harry Frieze. Survivors include his children Melvin Smith and his wife Connie of Sioux City, Iowa; Kenneth Smith and his wife Corinna of Harlan, Iowa; Christine Smith of Minneapolis, Minnesota and Pam Frieze of Council Bluffs; eight grandchildren; many great grandchildren; siblings Betty Malone of Griswold, Iowa; and Tommy Frieze of Council Bluffs, Iowa; nieces and nephews; other relatives and many friends.

Kent Clarence Frieze, the son of Clarence Wilber and Louise Emma (Moreland) Frieze, was born on May 17, 1947 in Council Bluffs, Iowa. While growing up a momma&#8217;s boy, he attended Longfellow Elementary School in Council Bluffs and was a... View Obituary & Service Information

The family of Kent Frieze created this Life Tributes page to make it easy to share your memories.

Send flowers to the Frieze family.