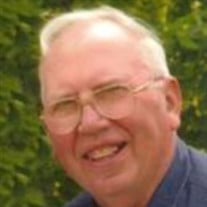 Kenneth Warner Thomsen, son of Warner J. Thomsen and Ruby I. (Best) Thomsen, was born July 9, 1935 in Shelby, Iowa. He attended school in both Shelby and Walnut schools. He graduated from Walnut High School in 1953. Ken joined the United States Navy in 1954. While in basic training he realized he wanted to spend his life with his true love Marjorie (Marge) Begley. They married on June 12, 1955. They began their lives stationed at different ports in the U.S. Ken was honorably discharged from the Navy in 1958. They came back to Walnut to start their civilian lives. Ken was a mechanic; from small engines to diesels - he was your man! He held many mechanic jobs throughout his life. He retired in 2005, but continued doing mechanic work, as a hobby in his shop in Tennant, Iowa until his health required he sell the shop and equipment in 2009. Ken cherished his wife, children, and family! Kenneth died on Wednesday, April 8, 2020 at Elm Crest Retirement in Harlan, Iowa. He had reached the age of eighty-four years, eight months, and thirty days. Kenneth was preceded in death, by his wife of 63 years; Marjorie (Marge) Thomsen, his parents, and one infant sister Shirley Ann Thomsen, his father and mother in law, one grandson Brandon Thomsen, one sister Audrey Sizelove, one brother Richard Thomsen, and one brother-in-law Donald Begley. He is survived by his 3 children V. (Rick) and Lori Thomsen of Omaha, NE; Barney and Carol Thomsen of Anita, IA; and Lori Teachout of Tennant, IA; four grandchildren Nickie (Jason) Brandis, Stefanie Thomsen, and Stacie Thomsen all of Omaha, NE; Cory Thomsen of Anita, IA; two "adopted grandchildren" Ryan and Anna Dauel of Malmo, NE; 8 great grandchildren; one sister Dorothy Sievers of Walnut, IA; other relatives and friends. There will be a private family burial at a later date.

Kenneth Warner Thomsen, son of Warner J. Thomsen and Ruby I. (Best) Thomsen, was born July 9, 1935 in Shelby, Iowa. He attended school in both Shelby and Walnut schools. He graduated from Walnut High School in 1953. Ken joined the United... View Obituary & Service Information

The family of Kenneth W. Thomsen created this Life Tributes page to make it easy to share your memories.

Send flowers to the Thomsen family.