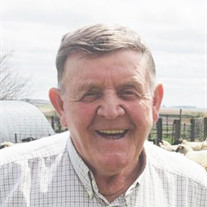 Kenneth Jo Suhr, son of Raymond and Josephine Suhr, was born in Walnut, Iowa, May 1st 1942 and was baptized and confirmed at Peace United Church in Walnut. He attended school at Walnut Community School. He participated in baseball, football, basketball, 4H and FFA. He graduated in 1960. May 25,1962 he married Marie Filipowicz at Saint Bridgets in Omaha, NE. After marriage they made their home in Walnut and became members of St. Patrick’s Catholic Church. To this union, four sons were born: Christopher Allen, Scott Michael, Brian Keith, and Kevin Raymond. He began farming in 1965 raising corn, soybeans, hay, cattle, hogs, chickens, and sheep. In 1979, he began Suhr Club Lambs and for the last 41 years has produced many champion lambs around the country. He worked at Western Iowa Pork for many years until it closed, he then began working at Greater Omaha before taking a job with Western Engineering until his retirement. Kenny was a 4H leader for many years. He worked hard to give 4H kids an opportunity to work with livestock and vocational trades throughout the country. Kenny was recognized at the Iowa State Fair for the many years of being a 4H leader. Kenny was also involved in his kids and grandkids sporting activities as well as nieces and nephews. He was instrumental in starting the Walnut Indians Baseball Club. Kenny followed and loved to attend sporting events with his family, giving colorful commentary. He was a big Iowa Hawkeyes fan offering up coaching suggestions to all who listened. Kenny was known as a hard worker with a big heart, always willing to help anyone in need. Welcoming anyone in for a cup of coffee (whether you liked coffee or not) and a visit. He never met a stranger. Throughout his life he selflessly cared for his son Chris and wife Marie. In the 41 years of Suhr Club Lambs, he developed lifelong friendships. He was always available and willing to help anyone with their livestock. There are many family memories of showing livestock at livestock shows throughout the country. Kenneth died on Friday, November 20, 2020 at the age of 78. He is survived by his wife, Marie of Heritage House in Atlantic IA; sons Scott (Natalie) of Adair IA; Brian (Sharon) of Josephine TX; Kevin (Sarah) of Overland Park KS; 13 grandchildren: Chase and his girlfriend Damara; Dillon and his girlfriend Hailey; Carly; Cade, Colton; Madison; Trevin; Chloe; Shelby; Cash; Lincoln; Creighton; and Hudson. Siblings Marilyn Singer of Mesa AZ; Terry (Cindy) Suhr of Walnut IA; brother-in-laws Steve Derickson of St. Louis MO; Ted (Mary) Filipowicz of Eatonton GA; Ray (Karen) Filipowicz of Elkhorn NE; many nieces and nephews. He was preceded in death by his parents Raymond and Josephine, his son Chris, his siblings Norma Jean, Verla, brother-in-law Howard, brother-in-law John Singer, Jim, sister-in-law Carol, Charlie, Raymond Jr, sister-in-law Gloria Derickson, in-laws Ted and Mildred Filipowicz.

Kenneth Jo Suhr, son of Raymond and Josephine Suhr, was born in Walnut, Iowa, May 1st 1942 and was baptized and confirmed at Peace United Church in Walnut. He attended school at Walnut Community School. He participated in baseball, football,... View Obituary & Service Information

Funeral Mass will be broadcasted on pauleyjones.com

Send flowers to the Suhr family.