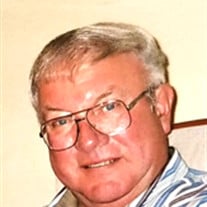 Kenneth John Foxhoven, son of Laverne and Odelia (Gaul) Foxhoven was born February 13, 1944 in Woodbine, Iowa. He was baptized at Sacred Heart Church in Woodbine. He attended Cast #4 Country School in Portsmouth, Iowa, St. Peter’s Catholic School in Defiance, then graduated from St. Joseph’s Catholic School, with the class of 1962. After high school, Ken served in the National Guard. On September 11, 1965, he was united in marriage to Jane Emma Schneider at St. Boniface Catholic Church in Westphalia, Iowa. They raised two daughters: Sherri and Shawn. Along with farming, Ken also worked many years at Dubuque then Farmland in Denison, Iowa. He was a hard worker and always provided for his family. He retired in 2008. He liked watching and keeping up on NASCAR racing. His preferred tractor was John Deere. Ken liked traveling and enjoyed spending time and visiting with his family and friends. He always looked forward to the yearly family reunions. Ken moved to Manilla Manor in 2017. He died on Saturday, January 16, 2021 at Bergan Mercy Hospital in Omaha, Nebraska, attaining the age of seventy-six years, eleven months and three days. In addition to his parents, he was preceded in death by his wife Jane Foxhoven. He is survived by his daughters Sherri and her husband Dave Eubanks of Scottsbluff, Nebraska; Shawn and her husband Todd Fjestad of Greenville, South Carolina; grandchildren: Warren Eubanks, Christian Eubanks and his wife Kayla, Ford Eubanks, Quentin Ripley; one great granddaughter Mia Eubanks; siblings Joyce and her husband Dave Kenkel of Panama, Iowa; Lynn Schneider of Omaha, Nebraska; Gail Foxhoven and his wife Betty of Earling, Iowa; June Foxhoven of Omaha, Nebraska; nieces and nephews; other family members and friends.

The family of Kenneth John Foxhoven created this Life Tributes page to make it easy to share your memories.

Send flowers to the Foxhoven family.