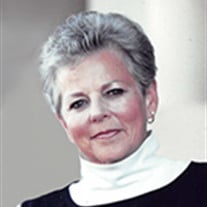 Bobby June Petsche, daughter of George Brown and Pauline (Thornhill) Mahoney, was born June 28, 1937, in Plainview, Texas. At the age of 5, her family moved to Richmond, California, where her parents worked in the shipyard during World War II. Her family then spent a few years following her father's employment around Northern California. June explained these years as an exciting adventure and she often talked about Santa Rosa, which was one of June's favorite places. The family settled in Oakland, California, where she attended middle school and graduated from high school. After graduation, she attended Oakland Junior College where she was a member of Theta Chi Epsilon. On September 15, 1956, June was united in marriage to Leonard Petsche in Oakland, California. They lived in San Rafael while Leonard was in the Air Force. Several years later, they moved to Harlan to operate the family business (Petsche Plumbing & Heating). Seven children were born to this union: Dan, Steve, Robert, Lisa, Michael, Joe and Carolyn Marie. While raising their children, June was very involved in her children's activities: Girl Scout Leader, Den Mother for Boy Scouts, President of Band Parents, CCD Teacher for St. Michaels. She was an active member of the Ladies Guild of St. Michael's, the Ladies' Golf Association, the Ladies League at Harlan Golf and Country Club, and was on many country club committees. After the kids were older, June worked for Edward D. Jones for twenty years where she developed a keen interest in stock market activities. June flourished in many of her hobbies. She was an avid golfer and she loved to read, garden, knit, and sew. She was also known to speak a little bit of Spanish as well. Following Leonard and June's retirement, they wintered in Arizona from 1998 to 2006. In 2007 they purchased a house in Queen Creek, Arizona, and moved there permanently. June and Leonard attended Mary Magdalen and Our Lady of Guadalupe Catholic Churches in Queen Creek. In April of 2017, they moved back to Harlan to reside in an apartment on Joe and Laura's acreage. June died on Thursday, January 27, 2022, at the Elm Crest Retirement Home in Harlan, attaining the age of eighty-four years, six months, and thirty days. In addition to her parents, June was preceded in death by her husband Leonard in June of 2017, infant daughter Carolyn Marie, brother Kenneth Brown, twin brother Gene Brown, stepfathers Harley Mixel and Arthur Mahoney. She is survived by her children Daniel Petsche of Council Bluffs, Iowa; Steven (Louri) Petsche of Phoenix, Arizona; Robert (Rochelle) Petsche of Onawa, Iowa; Lisa Petsche of Phoenix, Arizona; Michael Petsche of Denver, Colorado; Joe (Laura) Petsche of Harlan, Iowa; 10 grandchildren: Stephanie, Jeremy, Hailey, Jessica, Jennifer, Matt, Nicholas, Jacob, Ashley, and Megan; 4 great grandchildren Jack, Leo, Weston, and Delaney; in-laws Isolde Brown and Lea Brown of Brookings, Oregon; Billie Petsche of Boise, Idaho; George (Sue) Petsche of Harlan; Jim Petsche of Harlan; Charlene (Neil) Mahlberg of Harlan; Phyllis Stephany of Harlan; Lucille McKeighan of Las Vegas, Nevada; nieces and nephews; other family members and friends.

Bobby June Petsche, daughter of George Brown and Pauline (Thornhill) Mahoney, was born June 28, 1937, in Plainview, Texas. At the age of 5, her family moved to Richmond, California, where her parents worked in the shipyard during World War... View Obituary & Service Information

The family of Bobby June Petsche created this Life Tributes page to make it easy to share your memories.

Send flowers to the Petsche family.