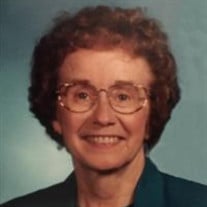 June Baker passed away peacefully at Reed Place in Denison. A Visitation will be held on Friday, June 26, 2020 from 5:00 PM until 8:00 PM at Pauley Jones Pfannebecker Funeral Home in Denison. Social distancing guidelines will be observed. A Public Funeral Service will be held on Saturday, June 27, 2020 at 2:00 PM at Pauley Jones Pfannebecker Funeral Home in Denison. Social Distancing seating will be observed. A Private Family Burial will follow the Funeral Service. June Baker was born Barbara June Williams in Washington, D.C. on May 22, 1924. She was the youngest of three of Lydia and Ralph Williams. Sadly her father died when she was only one year old. Her mother, Aunt Nancy, and Aunt Mary purchased a house together on Marietta Place. June was raised there with her sister Nancy and brother Ralph. Many summers June left the city and stayed with her cousin Claire's family. June was working for the internal revenue service in Washington, D.C. as a young woman. During the 1940's and World War II, she met Paul Baker, from Carroll, IA, at an USO dance. Paul was serving with the Joint Chiefs of Staff as a Master Sergeant. She had given him her phone number but he called the wrong number in error. Luckily the wrong number was a friend of June's who helped him. They were married there on April 4, 1945, and lived in Alexandria, Virginia, until Paul's discharge. They then moved to Chicago where Paul had enrolled in the Northern Illinois College of Optometry. After graduation, Paul opened a private practice in Denison in 1949, associated with Drs. Kuhlmann and Brownmiller in 1986, retiring in 1990. June and Paul lived first upstairs in Mrs. Newbomb's house on 2nd Ave N, then on 16th Street, and finally on Broadway for over 50 years, where they raised their three children. After selling the Broadway house, they moved into the Realife Co-op on 20th Street. During their entire time in Denison, they were active members of Trinity Episcopal Church. June was a member of the choir, the church guild, the Bishop's committee and was treasurer for many years. June and Paul were active bridge players being in several different groups over the years. Bridge was one way that June kept her mind sharp after Paul's death in 2010 at the age of 89. June volunteered at the McHenry House, was a member of Questers, Friday Club, and Eastern Star. June spent her last three years at Reed Place, being assisted by a fabulous group of caring individuals. She died peacefully on June 22, 2020, at the age of 96 years and one month. June has donated to many local organizations in the past several years including the Eventide Foundation, Rotary, Kiwanis, and the Women in Business Impact Organization. The WIBIO honored June and Paul by having them be the subjects of part of a sculpture project located at Hwy 30 and 20th Street. Including her parents, Lydia and Ralph Williams, and husband Paul, June was also preceded in death by her brother Ralph Williams and sister Nancy Dalton. Those remaining to cherish her memory include her three children and their spouses: Ross and Mary Lou Baker of North Potomac, Maryland; Barbara and James Hougas of Papillion, Nebraska; and Robert Baker and Margo Mickelson of Maple Grove, Minnesota; her five grandchildren: Michael, James, Katherine, Elizabeth and Robert; seven great grandchildren, other relatives and friends.

June Baker passed away peacefully at Reed Place in Denison. A Visitation will be held on Friday, June 26, 2020 from 5:00 PM until 8:00 PM at Pauley Jones Pfannebecker Funeral Home in Denison. Social distancing guidelines will be observed. A... View Obituary & Service Information

The family of June Baker created this Life Tributes page to make it easy to share your memories.

June Baker passed away peacefully at Reed Place in Denison. A...

Send flowers to the Baker family.