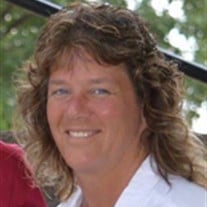 *Masks are required for the visitation and service.* **Live streaming of the service will be available on the Pauley Jones website.** Julie Ann Irlbeck, the daughter of Gerald "Jerry" and Sandy (Hinders) Irlbeck, was born on April 23, 1968 in Carroll, Iowa. She attended H-T-R school in Templeton until high school where she then transferred to Kuemper Catholic School in Carroll. Julie graduated high school in 1986. Following high school, she took classes at DMACC. Ultimately, she was ready to begin working. In 1992, Julie met Craig Promes on a local golf course and the two began what ended up being two years of dating. Julie and Craig married on September 24, 1994 at Sacred Heart Catholic Church in Templeton. While Craig was working at Farmland (now called Smithfield), Julie was working in an office setting, but that environment wasn't for her. Shortly after they bought a home in Denison in 1995, Julie began working at Farmland where she continued to work until her passing. Julie enjoyed a multitude of activities including crafting, cooking, and spending time on the lake in Lake View. More than anything, she loved spending time with her family and always made it known how proud she was of them. From being at the lake with her family, friends, and dogs, to adoring her two-year-old grandson, Julie was always photographing every activity to create a lasting memory. With her big personality and constant smile, Julie made a lasting impression on every single person she met. Julie was a wonderful wife, mom, daughter, sister, and friend. On Sunday, September 13, 2020, Julie passed away at the University of Nebraska Medical Center in Omaha, Nebraska at the age of fifty-two years, four months, and twenty-one days. She was preceded in death by her father Jerry Irlbeck and brother-in-law Marlan Kohorst. Those left to cherish her memory include her husband Craig Promes of Denison; son Nathan Promes and his fiancée Ashley Diedrich of Waukee, Iowa; step-son Sean Promes and his wife Kimberly of Johnston, Iowa; grandson Gabriel Promes of Johnston, Iowa; mother Sandy Irlbeck of Templeton, Iowa; siblings Tammy Kohorst of Arcadia, Iowa; Jeff Irlbeck and his wife Kim of Carroll, Iowa; Nancy Bruch and her husband Brian of Audubon, Iowa; mother-in-law Sharon Promes of Carroll, Iowa; numerous nieces, nephews, cousins, and many, many friends. A 10:30 AM Mass of Christian Burial was celebrated on Saturday, September 19, 2020 at St. Rose of Lima Catholic Church in Denison, Iowa. Rev. Randy Schon was the celebrant. Daniel Bierbordt, Sean Bicknase, Bryce Tessman, Michael Kohorst, Tyler Kohorst, and Chris Irlbeck served as casket bearers. Music for the service, sang by Michelle Ahrenholtz and accompanied by Julie Hamann, included “On this Day, O Beautiful Mother”, “Be Not Afraid”, “Hail Mary: Gentle Woman”, and “On Eagles Wings”. Interment was held at St. Rose of Lima Cemetery in Denison, Iowa.

*Masks are required for the visitation and service.* **Live streaming of the service will be available on the Pauley Jones website.** Julie Ann Irlbeck, the daughter of Gerald "Jerry" and Sandy (Hinders) Irlbeck, was born on April 23, 1968... View Obituary & Service Information

The family of Julie Promes created this Life Tributes page to make it easy to share your memories.

*Masks are required for the visitation and service.*

Send flowers to the Promes family.