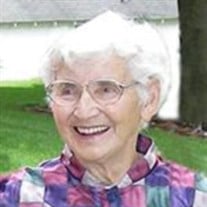 Juanita Ruth Hahn Bachmann passed away on June 6, 2021, at Reed Place in Denison, Iowa. She was born in Mapleton, Iowa, on February 12, 1923, to Herbert Max and Jennie Lucile Hahn, the third of nine children. She graduated from Mapleton High School in 1940 and attended nurse’s training for a time in Marshalltown, Iowa, before marrying Ralph Bachmann of Denison in 1942. Together they had eight children. Preceding Juanita in death were her husband Ralph in 2000, daughter Nora Bretey in 2015, grandson Scott Bachmann in 2019, brothers Norman, Henry, and Francis, and sisters Pauline and Jenny. Those left behind to remember Juanita with much love and fondness are her sons and daughters Janet Bachmann (Jim Lukens), Thomas (Gloria) Bachmann, Bruce Bachmann (Nancy Sauerman), Marcia Bachmann (Richard Meyer), Brian Bachmann (Georgia Heald), Andrea (Richard) Kaitany, Sylvia Bachmann, and son-in-law Clayton Bretey. Her 12 surviving grandchildren are Boris Bachmann (Chinatsu Sazawa), Rachel Bachmann (Ben Kubczak), David (Jennifer Davis) Bachmann, Tasha (Jesse) Stimson, Jordan (Stephanie) Bretey, Devon Bretey, Reuben (Lesley) Bretey, Benjamin (Ashley) Bretey, Kip-Chumba Kaitany, Kibor Kaitany, Jerotich Kaitany, and Jelimo Kaitany. Great-grandchildren are Kenji Bachmann, Malikai Bachmann, Ella Bretey, Elijah Bretey, Esther Bretey and Jeremiah Bretey. Also missing Juanita are her sisters Liz and Shirley, and her big brother Johnny. Juanita spent nearly 75 years on the farm near Denison. Endlessly curious and questioning, Juanita raised and preserved food from a large garden; milked cows and raised chickens for about 30 years; and worked at Eventide Care Center as a certified medical aid for many years. She was an active member of the United Presbyterian Church where she taught Sunday school, served as an elder, and helped with many, many coffee hours and fundraisers. She also provided respite care and served as President and later Secretary of the Golden K Kiwanis. As the mother of eight, Juanita saw each of her children as unique and taught them to be critical thinkers. It would be impossible to count the number of trips Juanita made to town to take her children to their many activities, and she provided a haven, adventure, and gathering place for her grandchildren and great-grandchildren. Juanita was able to live in her home until 2021. Her family is very grateful that she had Eventide Care Center and Reed Place available to her in her final months for excellent, loving care. The family is planning to delay services until fall 2021 to allow them all to gather.

Juanita Ruth Hahn Bachmann passed away on June 6, 2021, at Reed Place in Denison, Iowa. She was born in Mapleton, Iowa, on February 12, 1923, to Herbert Max and Jennie Lucile Hahn, the third of nine children. She graduated from Mapleton... View Obituary & Service Information

The family of Juanita Ruth Bachmann created this Life Tributes page to make it easy to share your memories.

Send flowers to the Bachmann family.