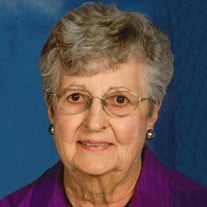 Joyce Delores Graeve, daughter of William Feser and Anna (Greiner) Feser, was born March 21, 1932, in Portsmouth, Iowa. She was baptized and confirmed at St. Mary’s in Portsmouth and graduated from St. Mary’s Catholic School. After graduation, Joyce attended Mount St. Scholastica College in Atchison, Kansas. She was employed in Omaha, Nebraska, for Mutual Benefit until her marriage to Leonard Graeve on January 8, 1955. The couple wed at St. Peter’s Catholic Church in Omaha, and seven children were born to this union: William, Harvey, Dale, Sharon, Julie, Mark and Stan. The couple raised their children on the family farm near Earling, Iowa, where they were members of St. Joseph’s Parish. Joyce made a large vegetable and flower garden, and took particular pride in her pink petunias and colorful gladiolas. Joyce was always active and creative, making quilts, doilies, ornaments and other treasured gifts. She enjoyed refinishing furniture, crocheting, tatting, cake decorating and calligraphy. She also loved dancing and traveling with Leonard, and baking and making treats for her grandkids. Joyce and Leonard semi-retired in 1989 and moved to Harlan, Iowa, where they were members of St. Michael’s Catholic Church. After moving to Harlan, Joyce served as a Eucharistic Minister as well as a Lay Minister, delivering communion to the homebound and the hospital. She joined the Catholic Daughters Court of St. Katherine in 1964 and was a member of the St. Michael’s Guild. Joyce also worked for Mickel’s Catering Service and at the local grocery store, passing out samples to customers. She put her family’s needs before her own and instilled in her children the values of hard work, education and faith. Joyce died peacefully surrounded by her loving family on Monday, August 24, 2020, having attained the age of 88 years, five months and three days. In addition to her parents, she was preceded in death by her husband of 65 years, Leonard, and siblings Floyd Feser, Mary Ann Feser, Marjorie Ohlinger, Mark Feser and Joan Gangestad. She is survived by her children: William Graeve and his wife Jayne of Lincoln, Nebraska; Harvey Graeve and his wife Laura of The Woodlands, Texas; Dale Graeve and his wife Sue of Earling, Iowa; Sharon and her husband Dave Altman of La Vista, Nebraska; Julie and her husband Daryl Klein of Omaha, Nebraska; Mark Graeve of Omaha, Nebraska; Stan Graeve of Omaha, Nebraska; several grandchildren and great-grandchildren; her sister Mildred Lang of Omaha, Nebraska; many nieces and nephews; and other family and friends. In lieu of flowers, memorials may be made in Joyce’s memory to Shelby County Catholic Schools or to St. Judes.

The family of Joyce Delores Graeve created this Life Tributes page to make it easy to share your memories.

Send flowers to the Graeve family.