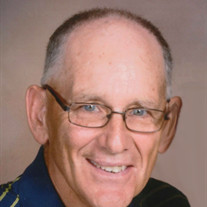 John Bernard Zimmerman was born September 1, 1949 at Mercy Hospital in Council Bluffs, Iowa to Bernard and Valerie (Gaul) Zimmerman. He was baptized at St. Mary’s Catholic Church in Avoca. He attended Shelby Public School while the family lived on a dairy farm east of Shelby. It was here he learned to work and do chores at an early age, along with tagging beside the many hired men. In 1957 the family moved their family operation to “Uncle Charley’s farm” by Westphalia. He then attended St. Boniface grade school, graduated with the Westphalia-Defiance class of 1967. After graduating he worked on the family farm and at Squealer Feeds. He enjoyed traveling with friends and helping with the Dispenser Upright band. In 1971, he met a student nurse while cruising the circuit in Harlan and on February 3, 1973 he was married to Bonnie Hollander at the Zion Lutheran Church in Denison, Iowa. They made their home in Westphalia. John served as City Councilman and later Mayor and managed the Water Department. He was instrumental in the City hooking onto Rural Water. In the January Blizzard of 1975 he started as a letter carrier for the Harlan Post Office and was employed there for 42 years. In 1979, he acquired farm land from an uncle and they moved to their present home and began farming. John was a member of the Huff n Puffers Bike Club and rode in 17 RAGBRAIs. In September of 2015 he suffered a traumatic brain injury from a fall which forced him to retire March of 2017 from the Post Office. In June of 2017 he was diagnosed with Stage 4 Pancreatic Cancer, and went on chemotherapy for the next 2 years. He continued to farm with the help of family, neighbors and friends at Harvest. He enjoyed the daily ritual of going to the Klub House for morning coffee, sharing conversation, news clipping and a short joke. He installed his love and the excitement of sports competition with his children and grandchildren and attended their games. He focused his attention on the Royals and the Chiefs, reading the Daily paper, remembering History and following Politics. John was preceded in death by his parents, infant brother Thomas James, brothers-in-law Wilfred Macaulay and Duane Hollander. He is survived by his wife, Bonnie, children, Brad (Kim) , Smithville, Mo, Sarah (Dan) Schumacher, Harlan, IA, Danny (Jessica), Lincoln, NE, and Julie (Eric) Hartwell, Olathe, KS. Grandchildren Zoe Zimmerman, Madison and Austin Schumacher, Alyssa and Hannah Zimmerman and James Hartwell. Siblings Maribeth Zimmerman, Rae Zimmerman, Rita Macaulay, Paul (Arlene) Zimmerman, Sr. Jodelle Zimmerman and Phil (Sharyn) Zimmerman. Sister-in-law, Eunice Hollander, aunt, Ann Gaul, Angie Gaul, and Sr. Irene Zimmerman and uncle Dewie Gaul, nieces, nephews, cousins and friends.

John Bernard Zimmerman was born September 1, 1949 at Mercy Hospital in Council Bluffs, Iowa to Bernard and Valerie (Gaul) Zimmerman. He was baptized at St. Mary&#8217;s Catholic Church in Avoca. He attended Shelby Public School while the... View Obituary & Service Information

The family of John Zimmerman created this Life Tributes page to make it easy to share your memories.

Send flowers to the Zimmerman family.