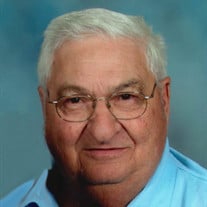 John "Buzz" Wendt , son of John & Elsie (Thompson) Wendt, was born Aug. 10,1932 in Irwin, Iowa. He attended grade school, at the country school just down from where he lived, north of Panama, Iowa. He also graduated from Panama school. On February 23, 1952 Buzz was united in marriage to Elaine Thielen at St. Mary's Catholic Church in Portsmouth, Iowa. Buzz and Elaine resided in Portsmouth and eight children were born to this union: Susan, Lucy, John, Karen, Larry, Peg, Bev and Traci. Buzz started farming at the age of 18 when his father passed away. He also did custom grinding and worked part time at the elevator in Portsmouth. He coached little league baseball and loved watching his children and grandchildren play sports. He was one of the biggest Cyclone fans in Shelby county. No matter the sport, Buzz was sure to be in the crowd. He served on multiple boards, was the fire chief and served on wild life organizations. He enjoyed hunting over the years with friends. One of his favorite things to do was smoke the meat for the annual stag. He died in his home on December 30,2020 attaining the age of 88 years, four months and 20 days. In addition to his parents, he was preceded in death by his children Karen (Burk), Susan(Buck), Lucy(Knauss), son in laws Pat Burk and Steve Buck, daughter in law Rhonda Wendt, grandchildren P.J Burk, Adam Barta, Nick Wendt, Brad Knauss, great grandchildren Abby Buck and Georgia Berry. He is survived by his wife Elaine of 68 years, children John & his wife Mary Ann(Koch)Wendt of Panama, Ia, Larry & his wife Jeana(Knoble) Wendt of Ceresco, Ne, Peg & her husband Bob Barta of Salado Tx, Bev & her husband Rich Priestly of Salado Tx, Traci Schuning and her husband Trent of Portsmouth, Ia; 18 grandchildren, 36 great grandchildren; nieces and nephews; other relatives and many friends.

John "Buzz" Wendt , son of John & Elsie (Thompson) Wendt, was born Aug. 10,1932 in Irwin, Iowa. He attended grade school, at the country school just down from where he lived, north of Panama, Iowa. He also graduated from Panama school. On... View Obituary & Service Information

The family of John "Buzz" Wendt Sr. created this Life Tributes page to make it easy to share your memories.

Send flowers to the Wendt family.