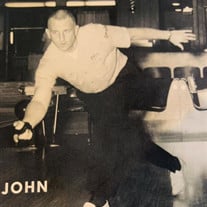 John Anton Smejkal, the son of John and Elise (Grassau) Smejkal, was born on November 11, 1932 in Omaha, Nebraska. He was raised in southern Omaha and went to South High graduating in 1950. After high school, he was recruited to play Double-A baseball. After some time he decided to come back home and work in Omaha for food brokering companies. He later transferred to Des Moines, Iowa. John Smejkal married Jean Emily Pospishil on November 1, 1952. They had three daughters Charlotte, Carol, and Jane. On October 6, 1992, Jean lost her battle cancer and passed away. When in Omaha, John was offered a chance to bowl professionally but turned it down. John had been on T.V. for bowling a few times and even play on a bunch of leagues. His millions of bowling trophies prove that. John would later on get married to Suzie Stoll on February 23, 1995 in Las Vegas, Nevada. In 2003, John was inducted into the Softball Hall of Fame in Des Moines, Iowa. He died at his home in Denison, Iowa on Saturday, October 3, 2020, attaining the age of eighty-seven years, ten months, and twenty-three days. John is preceded in death by his parents John and Elise Smejkal; his first wife Jean Smejkel; his sister Susan Cahalane; his brother-in-law Patrick and Larry Stoll. Survivors include his wife Suzie Stoll Smejkal of Denison, IA: his children Emily Ditto of Denison, IA: Charlotte Robinson of Clive, IA: Carol Roach of DeSoto, IA: Jane (Dr. Michael) Bleyberg of Reno, NV: his grandchildren Thad (Mandy) Neuman of Johnston, IA: Sarah (Mike) Saladino of Chicago, IL:Stacy (Brandon) Pettit of Adel, IA: Lindsay (Robert) Crow of Goodland, KS: Erika (Jeff) Hoppe of Reno, NV: Dr. Mickey (Kiki) Bleyberg of Dupont, WA: his nine great-grandchildren: his brother-in-law Charles Pospishil of Prescott, AZ; best friends and former neighbors Dr. Ron and Meg Anderson of Clive, IA; nieces and nephews, other family members and friends.

John Anton Smejkal, the son of John and Elise (Grassau) Smejkal, was born on November 11, 1932 in Omaha, Nebraska. He was raised in southern Omaha and went to South High graduating in 1950. After high school, he was recruited to play Double-A... View Obituary & Service Information

The family of John Smejkal created this Life Tributes page to make it easy to share your memories.

Send flowers to the Smejkal family.