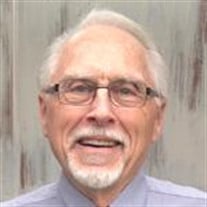 John Christiansen of Mesa, AZ, went home to be with our Lord December 27, 2019. He was the son of Lynden and Lou Verne Christiansen of Harlan Iowa. John graduated from Harlan High School and furthered his education in several areas including accounting. He then served in the US Air Force, during which time, he married Pat Maxwell and had three daughters. In 1991 John married Vy Tool of Des Moines, IA, and they recently celebrated their 28th wedding anniversary. While a resident of Harlan, John was a longtime employee of the Home Federal Savings and Loan and a member of the Lions Club, among other clubs and associations. In 1992 John and Vy moved to Rapid City, SD, where John was the Mortgage Lending Supervisor at Black Hills Federal Credit Union for 18 years. He retired in 2010 and they moved to Omaha, NE, to be closer to family. John enjoyed working part-time at Lowe's and made many dear friends during his 7 years there. In 2018, John and Vy moved to Mesa, AZ. In addition to his parents, John was predeceased by his sister Linda (Mick) Frasier, brother-in-law Dallas (Mick) Frazier and nephew Chris Summers. He is survived by his wife Vy, daughters; Deborah (Troy) Huber of Liberty, MO, Deanna Stone (Paul Zern) of Gilbert, IA; Dawn (Shaun) Henderson of Omaha, NE; a foreign exchange ‘daughter’ Alba (Ryan Paulsen) Aguillon Moreno of Parkersburg, IA; step-son John (Tammy) Tool of Palmer Lake, CO; and step-daughter Laura (Jay) Grimes of Rio Rancho, NM; 10 grandchildren; Malia Paben of Omaha, NE, Maddy Stone of Gilbert IA, Jonathan (Jennifer) Stone of Nevada, IA, Julia Stone of Des Moines, IA, Derek Tool of Newport Beach, CA, Joshua Tool of Greer, SC, Jordyn (Scott) Siepker of Des Moines IA, C. Ryan Shipley of Minneapolis, MN, and Taylor and Travis Grimes of Des Moines, IA. John is also survived by one sister Jane (Jerry) Summers of Overgaard AZ; and 4 nieces, Janelle, Michelle, Cindy, and Cathy. John was a veteran, loving husband, father, grandfather, brother, uncle and friend and will be missed dearly. Those wishing to remember John in a special way and in lieu of flowers, may make contributions to the Multiple Myeloma Research Foundation..

John Christiansen of Mesa, AZ, went home to be with our Lord December 27, 2019. He was the son of Lynden and Lou Verne Christiansen of Harlan Iowa. John graduated from Harlan High School and furthered his education in several areas including... View Obituary & Service Information

The family of John Christiansen created this Life Tributes page to make it easy to share your memories.

John Christiansen of Mesa, AZ, went home to be with our Lord...

Send flowers to the Christiansen family.