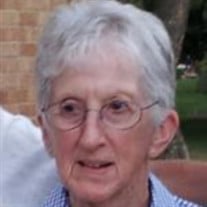 Joan Kay Colligan, daughter of James and Frances (Lindahl) Leonard, was born August 4, 1937 in Wakefield, Nebraska. She was baptized and confirmed at St. Luke Lutheran Church in Emerson, Nebraska. She attended District 15 Country School in South Thurston County, Nebraska for 8 years, then graduated from Wayne High School in Wayne, Nebraska. On August 30, 1954, Joan was united in marriage to Donald Colligan in Elk Point, South Dakota. They moved 20 times during their marriage while Donald was active in the United States Army, including 3 years living in Europe. Joan received her degree from Omaha Metro Tech as a medical transcriptionist, she then worked 25 years at Bergan Mercy Hospital in Omaha, Nebraska. She retired from Mercy Hospital in Council Bluffs, Iowa in 1996, after her and Donald retired to Shelby, Iowa. While their children were young, Joan worked in the schools the kids attended. She loved working in the cafeteria as a cook the most. She enjoyed knitting, crocheting, flower gardening, reading biographies, journaling and she was an excellent cook. While in high school she played the saxophone and enjoyed playing the piano for many years. She loved spending time with her children and grandchildren and had a special connection with her great grandchild, Natalie. Joan loved walking and visiting State Parks nationwide. Joan died on Friday, April 10, 2020 at Elm Crest Retirement Community in Harlan, Iowa, attaining the age of eighty-two years, eight months, and six days. In addition to her parents, she was preceded in death by her husband Donald, and brother Paul Leonard. She is survived by her children James Colligan of Omaha, Nebraska; Keith Colligan and his wife Cindy of Shelby, IA; Lisa and her husband Rick Knavel of Ennis, TX; 2 grandchildren, Katie (Ryan) Reich of Shelby, IA; Chloe Knavel of Ennis, TX; 1 great grandchild, Natalie Reich of Shelby, IA ; sister Billie Smith of Battle Creek, MN; brothers-in-law Robert Colligan and his wife Marlene of Wisner, NE; Louis Glister, Jr. and his wife Marilyn of Houston, TX; other family members and friends. Services and inurnment to by announced at a later date.

The family of Joan Kay Colligan created this Life Tributes page to make it easy to share your memories.

Send flowers to the Colligan family.