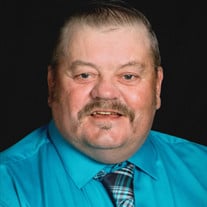 Gerald (Jerry) Plambeck, son of H.W. and Helen (Greiner) Plambeck was born April 19, 1948 on a farm outside of Persia. He was raised east of Persia his entire life. At an early age his aunt Doke named him “Bobo” after the neighbor’s dog. “Bobo” stuck with him for life. Even teachers in high school called him that. Bo attended a country school near his home and was taught by his grandma Kate Plambeck. He went to the US Army right after high school and served in Vietnam 1968 - 1969. He served with his “special brother” Harold Brown. They have stayed close all through these years. They both got wounded at the same time. After returning from Vietnam he married Carol Zacharias on January 17, 1970. To this marriage they had 4 daughters: Nicole Plambeck, Tara Ganzhorn, Andrea Plambeck-Knauss, and Katie Krohn. Bo worked at Iowa Pork Plant for years, then also went to Texas and worked for Cox Farms. He then went to Iowa DOT (Department of Transportation) until he retired. He then enlisted in the National Guards. He retired from the National Guards after 22 years. He enjoyed raising hogs. He enjoyed socializing with everyone he came into contact with, all the kids loved him. Another thing he liked to do is push his wife’s buttons. Bobo enjoyed watching politics and his western movies. On Wednesday, December 9, 2020 Bobo passed away at Jennie Edmundson Memorial Hospital, attaining the age of seventy-two years, seven months and twenty days. He was preceded in death by his parents: Bill and Helen Plambeck, brother Robert Plambeck, son-in-law Joe Gittins, nephew Johnny Plambeck and father-in-law Robert Zacharias. Those left to cherish his memory are his wife Carol of 50 years; Nicole Plambeck; Tara (Brian) Ganzhorn; Andrea (Brian) Plambeck-Knauss; and Katie (Jon) Krohn; grandchildren: Faith Olofson, Alexandra Niedermyer, Garret Gittins, Josephine Niedermyer, Dayton Olofson-Plambeck, Aubrey Krohn;; great granddaughter Addaleyn Olofson. He also leaves behind: Bill (Barb) Plambeck; Mary (John) Herkenrath; John (Ruth) Plambeck; Jan (Bob) Mortensen; Patty (Bob) West; Sam (Tracey) Plambeck; Lori (Dan) Reinig and many nieces, nephews, and friends.

The family of Jerry "Bobo" Plambeck created this Life Tributes page to make it easy to share your memories.

Send flowers to the Plambeck family.