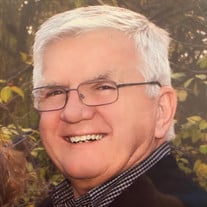 Jerry Edward Christensen, son of Christian and Esther (Obrecht) Christensen, was born on November 1, 1941 in Harlan, Iowa. He grew up and attended school in Tennant, Iowa. Growing up you would almost always find Jerry playing basketball in the driveway. He graduated in 1959 from Tennant High School. After graduation, he attained his bachelors and coaching certificate from Northwest Missouri State in Maryville, Missouri and later he earned his master’s degree from Wisconsin-Platteville. On November 10, 1962, Jerry was united in marriage to Rae Thomsen at the Trinity Lutheran Church in Avoca, Iowa. Together they had three children: Steve, Greg and Susan. In 1963, he began his basketball and teaching career in a little town of Ravenwood, Missouri. Little did he know, he would coach for the next 50 plus years. Jerry spent 10 years between Oxford Junction, Iowa, Carroll, Iowa and Warsaw, Illinois before making roots in Treynor, Iowa. While at Treynor, he surpassed several milestones, earned several awards and took seven teams to the state tournament, three of which included his two sons. Jerry finished with 618 victories. He was inducted into the Iowa Basketball Hall of Fame in 2007. He was a dedicated guidance counselor helping many students into college. After retirement, Jerry moved to Avoca where he spent time being a substitute teacher, driving buses and being a volunteer coach with the AHSTW basketball team. Jerry and Rae enjoyed traveling. Memorable trips included Switzerland, Hawaii and several cruises. During the summers, he loved spending time with family vacationing at Okoboji. Jerry adored his grandkids. He was very involved in his grandchildren lives and enjoyed being with them as much as possible. Jerry passed away on December 16, 2020 at Myrtue Medical Center in Harlan, having attained the age of seventy-nine years, one month and fifteen days. He is preceded in death by his parents; and brother David. Those left to carry on his legacy are his loving wife of 58 years Rae Christensen of Avoca, Iowa; children Steve Christensen of Minden, Iowa; Greg (Connie) Christensen of Tea, South Dakota; Susan (Brian) Wedemeyer of Avoca, Iowa; 6 grandchildren Zach (Lauren), Caleb, Ethen and Emily Christensen; and Taylor and Ryan Wedemeyer; sister Jeanette Wilkerson of Exira, Iowa; Judy (Larry) Gillam of DeSoto, Missouri; other relatives and many friends.

Jerry Edward Christensen, son of Christian and Esther (Obrecht) Christensen, was born on November 1, 1941 in Harlan, Iowa. He grew up and attended school in Tennant, Iowa. Growing up you would almost always find Jerry playing basketball in... View Obituary & Service Information

The family of Jerry Christensen created this Life Tributes page to make it easy to share your memories.

Send flowers to the Christensen family.