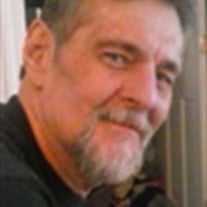 Jeffrey Dean Stehr was born on May 26, 1955, to Donald and Sharon (Winey) Stehr. He grew up in Denison, Iowa and attended the Denison public schools. In high school he enjoyed playing football as a lineman. During the last few weeks of football his senior year he practiced as a running back. This is how he broke his leg. He was honored with becoming a 2-time 2nd team all-conference football player. After high school Jeff joined the United States Army where he traveled to Germany and spent most of his service working with the Military Police. After being honorably discharged, Jeff was blessed with one daughter named Kateland. Jeff was a security guard at a hospital in Iowa City for some time. He went to trade school in Sioux City, Iowa and worked with a Cable Company installing cable down in Puerto Rico. For work, Jeff traveled to all sorts of places. He got to see Florida, Texas, Australia, and California among all of the other places he went to. Finally he worked in Webster City, Iowa until his health got the best of him. He spent the remainder of his days living with his girlfriend Becky in Harlan, Iowa, where he enjoyed watching TV./ His favorite show was a show that was his and Becky’s to watch: “The Walton’s”. “Say Yes to the Dress” was also a show that was found on Jeff’s TV, but not by his choice. On Tuesday, February 4, 2020, Jeff passed away at his home in Harlan attaining the age of 64 years, 8 months, and 9 days. He was preceded in death by his grandparents; mother Sharon (Winey) Stehr; and his infant son Brian Stehr. Those left to cherish his memory are his father Donald Stehr and his wife Sandy of Denison, Iowa; Becky Schaben of Harlan, Iowa; daughter Kateland Stehr of Britt, IA; grandson Xander McClelland; sisters Jill Grell of Danbury, IA; and Judi Castle and her husband Larry of Mapleton, IA; Becky’s children Chase and Donald Thraen; nephews Randy Grell and Josh Castle; nieces Tiffany Samuelson and Tara Castle; great nieces and great nephews; and several other family and friends. A visitation was held on Friday, February 7, 2020 at Pauley Jones Pfannebecker Funeral Home in Denison with a Prayer Service led by Pastor David Loeschen following. A musical recording of “Africa” by Toto was played during the prayer service.

Jeffrey Dean Stehr was born on May 26, 1955, to Donald and Sharon (Winey) Stehr. He grew up in Denison, Iowa and attended the Denison public schools. In high school he enjoyed playing football as a lineman. During the last few weeks of football... View Obituary & Service Information

The family of Jeffrey Dean Stehr created this Life Tributes page to make it easy to share your memories.

Send flowers to the Stehr family.