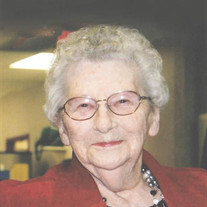 Jeannette M Maassen, daughter of Alfred and Tina (Krummel) Schaaf was born on a farm southeast of Avoca on January 15, 1923. She was the oldest of two children in her family and she spent her entire life in the Avoca and Walnut area. Jeannette was baptized and confirmed in the Lutheran faith and was a lifelong member of the Trinity Lutheran Church in Avoca. Jeannette was married to Allan Peters on October 1, 1942, and they were blessed with two children Dale and Beverly. Allan passed away suddenly on June 7, 1961. After losing her first husband, Jeannette worked at the Avoca Nursing home and was the head cook at the Walnut school as well as many other places to make a living for herself, Dale, and Beverly. On January 4, 1968, she married Curtis Maassen. They farmed near Corley, IA until they decided to build a new home together in Avoca and moved into town in 1984. Shortly after, her husband Curt became ill, and he passed away on September 29, 1985. Jeannette moved to Peace Haven in Walnut, Iowa in 2005 after selling her home in Avoca and then went to Northcrest Living Center in June of 2010. Jeannette was a loving homemaker, mother, grandmother, great-grandmother, great-great grandmother, sister, and wife. She was a talented baker, excellent cook, and enjoyed making holiday meals for her family. She spent countless hours cooking, gardening, canning, and going to the casino. She was active in bridge clubs, ceramics, bingo, and various activities with the women of her church. She was known for welcoming friends into her home and always had a stash of cookies or desserts ready for company who would drop in. On Sunday, January 16, 2022, Jeannette passed away at the Northcrest Living Center having attained the age of ninety-nine years and one day. She was preceded in death by her parents, husbands Allan and Curtis, son Dale Peters, daughter Beverly Ridnour, brother-in-law Richard Rock, niece Kim Carlson, along with many other family members. Jeannette is survived by her granddaughter Stacy (Todd) Larsen of Council Bluffs, Iowa, grandson Rob (Julie) Ridnour of Council Bluffs, Iowa, great-grandsons Tyler (Samantha Henderson) Ridnour and Brady Ridnour, two great-great grandchildren, sister Carolee Rock, nephew Mark (Barb) Rock, and son-in-law Dennis (Chris) Ridnour, as well as many nieces, nephews, and friends.

Jeannette M Maassen, daughter of Alfred and Tina (Krummel) Schaaf was born on a farm southeast of Avoca on January 15, 1923. She was the oldest of two children in her family and she spent her entire life in the Avoca and Walnut area. Jeannette... View Obituary & Service Information

The family of Jeannette Maassen created this Life Tributes page to make it easy to share your memories.

Send flowers to the Maassen family.