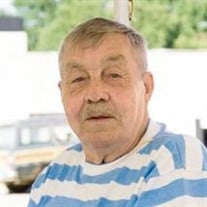 James August Sampson known as "Aug" was the son of LeRoy and Edna (Thies) Sampson. He was the sixth of eleven children and graduated from Walnut High School in 1963. He went on to serve his country with the United States Air Force, for four years overseas. He was a Vietnam veteran and a member of the American Legion Post No. 422 in Walnut, Iowa. Aug was employed as a truck driver for most of his life, receiving an award for over two million miles of safe driving. Throughout the years he was employed by Suhr Trucking, Stan Matthies Trucking and Steve Emken Trucking. He was united into marriage to Mylene Graham and Connie Jensen. Aug loved baseball, being a Legion member, family reunions, reading Westerns, cooking and hanging out at Glenn’s bar. He loved to cook, chili was one of his favorite dishes as well as Goulash and the Thanksgiving ham with lumpy gravy. On Memorial Day, he enjoyed putting flags out with his Legion comrades. Every year Aug was the first one to all the Sampson family reunions holding a spot for us all to join in. Growing up Aug loved baseball so much he would walk five miles to play a game, for a long time he held the record for stealing bases in Walnut. Aug entered into rest on Thursday, June 20, 2019 at the Atlantic Specialty Care in Atlantic, Iowa, attaining the age of seventy-four years and four months. He is preceded in death by his parents LeRoy and Edna Sampson; brothers Robert and Walter; brother-in-law Thomas Willie; sister-in-law Darlene Sampson . Left to cherish the wonderful memories are his siblings David (Carol) Sampson of Hancock, Iowa; John (Kay) Sampson of Walnut, Iowa; Arnie (Carol) Sampson of Pikeville, North Carolina; Mary Willie of Folsom, Louisiana; Wayne Sampson of Underwood, Iowa; Susan Libby of Walnut, Iowa; Martha (Randy) Hargens of Walnut, Iowa; Joseph (Margaret) Sampson of Elliott, Iowa; sister-in-law Barb Sampson of Avoca, Iowa; and many nieces and nephews who loved their Uncle Augie. Inurnment with Military Rites will be held at 6:00 PM on Friday, June 28, 2019 at the Layton Township Cemetery in Walnut, Iowa.

James August Sampson known as "Aug" was the son of LeRoy and Edna (Thies) Sampson. He was the sixth of eleven children and graduated from Walnut High School in 1963. He went on to serve his country with the United States Air Force, for four... View Obituary & Service Information

The family of James "Aug" Sampson created this Life Tributes page to make it easy to share your memories.

James August Sampson known as &quot;Aug&quot; was the son of LeRoy and...

Send flowers to the Sampson family.