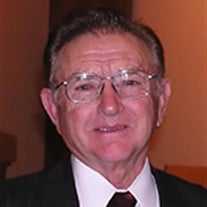 James Joseph Kohles, son of John and Theresia (Wilwerding) Kohles, was born on September 14th, 1928 on the family farm east of Earling Iowa. He was baptized and confirmed in St. Joseph's Catholic church where he remained a lifelong member. Here he attended grade school and high school, and graduated with the class 1946. He was drafted into the United States Army in 1951, where he served in Korea, and was honorably discharged in 1953. Upon completion of his service he returned home and resumed his passion of farming. During the winter months he lived in Omaha, NE, where he attended TV repair school and worked at Sears as a mechanic. On May 8, 1954, he was united in marriage to Elizabeth “Betty” Croghan at St. Mary's of the Assumption church in Panama Iowa. To this union, 6 boys and 2 girls were born. John (Jack), Alan, Gerry, Danny, Gerald, Loretta, Annette and Michael. Jim was an active member of the Earling community and St. Joseph's church where he served on the parish council. He was a member of the 4th degree of the Knights of Columbus Council # 1714 where he served as Grand Knight. He was also an active member of the American Legion Post #615 performing Honor Guard duties at many ceremonies. Jim was a dedicated husband and father who loved his wife, children and grandchildren. He enjoyed farming and raising livestock, taking special care of new arrivals. He loved spending time with his family, taking annual vacations, and many pictures. He dedicated his life to his family and his faith passing down his lessons of great love and kindness. During his lifetime he provided many words of wisdom and practiced patience with his desire to teach his children all he knew about life, farming and the most loving way to raise a family. His lessons and words will stay with us throughout our lives and we in turn will pass these lessons onto our children. Jim died on Friday, November 5, 2021 at the Meriwether Care Center in Omaha, NE, having attained the age of 93 years, 1 month, and 21 days. He was preceded in death by his wife Betty, his sons Gerry and Michael, his daughter-in-law Vicky (Jack), his parents, his brother Kenny and his wife Agnes, his brother Don, his brother Denny, his sister Marie, his brother Dewey and his wife Rita, and his sister Ruthie. He is survived by his children: Jack, Alan and his friend Margie Polenz, Danny, Gerald and his wife Jennifer, Loretta and her husband Don Wipf, Annette and her husband Gilbert Morales, 11 Grandchildren, 11 Great-grandchildren, his sister-in-law Joanne Kohles, his brother-in-law Tom Croghan and his wife Jean, his brother-in-law Ron Nolan, and many nieces and nephews.

James Joseph Kohles, son of John and Theresia (Wilwerding) Kohles, was born on September 14th, 1928 on the family farm east of Earling Iowa. He was baptized and confirmed in St. Joseph's Catholic church where he remained a lifelong member.... View Obituary & Service Information

The family of James Kohles created this Life Tributes page to make it easy to share your memories.

Send flowers to the Kohles family.