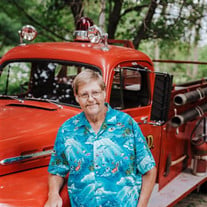 In lieu of flowers, the family suggests all memorials be made to: Hancock Volunteer Fire Department. James "Jim" Marcus Kock, 68, passed away on December 5th, 2020, at his home in Hancock, IA. He was the husband of Merrilee (Freeland) Kock. They shared 37 years of marriage together. Born in Council Bluffs, IA, he was the only child born to John and Irma (Koch). His parents had become naturalized citizens of the United States after immigrating from Germany. Jim grew up on a farm southwest of Hancock, hand-milking cows, collecting eggs, and doing other farm chores every day before and after school. He graduated from AvoHa High School in 1970, and graduated from Iowa Western Community College with an Associates Degree in Electronic Technology. After working for a variety of farmers and local electricians in the area, Jim joined the Navy in 1977 and attended Nuclear Power School. After an honorable discharge in 1978, he returned to the area and began working at Agriland FS in Avoca as an electrician. That same year, he established and operated his own business, Electric Service. Jim retired from Agriland in 2018 after 40 years, but continued to work as an electrician through the summer of this year, 2020, as "working" was one of his hobbies. Jim was a member of the United Church of Avoca, serving on Session multiple terms and participated in Pastor Nominating Committees. In 1989 he was elected to Hancock City Council, which he served until 2019. When he was asked to, he was elected to fulfill the office of Mayor. In 1990, he joined the Hancock Volunteer Fire Department, and in 1995 was elected Chief. He proudly served in that position until his death. During his leadership, the Hancock Fire Department was able to purchase much needed new fire trucks, current fire fighting equipment, and a brand new fire hall. He will be remembered for his determination when standing up for what was right, his dry sense of humor, and love of a good cup of black coffee, aka "mud". Jim was a great mentor, instructor, and all around dependable guy, though he didn't realize it until he witnessed the parade for him that occurred in front of his home the morning of Friday, December 4. He is survived by his wife, Merrilee; daughter Rashelle Wohlers (Caleb) and their children, Audrey and William, of Beebeetown, IA; and daughter Alicia Shearer (Brendon) and their children, Aiden and Wyatt of Allyn, WA. He was very proud of his daughter, Rashelle, for being a firefighter and EMT so she could deal with the "blood and guts" as he was "a hosedragger", and his daughter Alicia for following in his footsteps by joining the United States Navy as a Nuclear Machinist Mate. Jim is preceded in death by his parents, John and Irma Kock, of Council Bluffs, IA. **For the drive by visitation at Botna Bend Park in Hancock, we ask that all those attending stay in their cars and follow the correct flow of traffic. There will be signs directing cars on which way to enter the park. The family will greet each car from a distance. At the entrance, everyone will be given a pen and paper to sign their name(s), and also write a memory or a little note that will be placed inside of Jim’s Fireman’s boot that will be on display near the family. If anyone has any questions, please feel free to call the funeral home at (712) 343-2453.

In lieu of flowers, the family suggests all memorials be made to: Hancock Volunteer Fire Department. James "Jim" Marcus Kock, 68, passed away on December 5th, 2020, at his home in Hancock, IA. He was the husband of Merrilee (Freeland) Kock.... View Obituary & Service Information

In lieu of flowers, the family suggests all memorials be made to: Hancock Volunteer Fire Department.

In lieu of flowers, the family suggests all memorials be made...