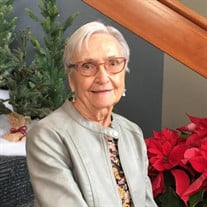 Helen Ann Steele was born on September 4, 1932 in Charter Oak, IA, the daughter of Bernard and Verna (Staley) Remmes. She died Saturday, April 25, 2020 at Collier Hospice in Wheat Ridge, CO at the age of 87. Helen loved growing up in a big family in a small Iowa town. After graduation from high school in Charter Oak, Helen started working at Crawford County Bank in Denison, IA.. Helen soon met the man she would share her life with, Almon (Al) until he died in November of 2013. Helen and Al started their family soon after marriage. Between November of 1954 and March of 1959 they had four children. During this time, Al was working in the Communication Industry. He began his career in Denison, IA then was transferred to Oakland, IA where they raised their family. Helen stayed at home with their children until they were all in school, then she worked for the local bank in Oakland. Al and Helen were both very involved with their children’s school and extracurricular activities. They also had a group of friends they regularly socialized with, playing cards every month. Golf was a favorite summer activity. Al retired in 1989 giving them an opportunity to travel, which they both loved to do. They were fortunate enough to travel throughout the US, and to go to Europe, Canada and Hawaii, spending time with their children and grandchildren along the way. Helen especially cherished the time she was able to spend with her family. Al and Helen were living in Olathe, KS at the time of Al’s death. The following year Helen moved to Arvada, CO where she quickly adapted to a new way of life. Helen’s Catholic faith was extremely important to her throughout her life. After moving to Colorado, she was able to be more involved with church activities and flourished from the friendships she made with members from the Senior Group at St Joan of Arc. Helen is survived by her four children, Cindi Nielson, Stan (Joan), Carolyn (Mike) Bonavida, Greg (Cindy), twelve grandchildren, 7 great grandchildren, sisters Cathy and Jean Remmes (Jean passed away July 19 , 2021) , and brothers Fr. Richard Remmes and Joe Remmes. She was preceded in death by her husband Al, her parents, five brothers, and one sister.

Helen Ann Steele was born on September 4, 1932 in Charter Oak, IA, the daughter of Bernard and Verna (Staley) Remmes. She died Saturday, April 25, 2020 at Collier Hospice in Wheat Ridge, CO at the age of 87. Helen loved growing up in a big family... View Obituary & Service Information

The family of Helen Ann Steele created this Life Tributes page to make it easy to share your memories.

Send flowers to the Steele family.