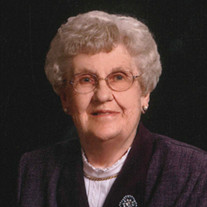 Helen Marie Roenfeld, daughter of Nels and Dora (Knutsen) Nielsen, was born August 29, 1924 on her parent’s farm in Clay Township, Shelby County, Iowa. She was baptized at Jacksonville Lutheran Church and confirmed at the Danish Lutheran Church in Elk Horn, Iowa. She attended Jackson #4 Country School and graduated from Harlan High School in 1942. She worked at the Kimballton Bakery after graduation. On February 18, 1948, Helen was united in marriage to Harry Roenfeld, Jr. at Jacksonville Lutheran Church in Jacksonville, Iowa. They moved to their home place south of Rorbeck, where they raised three children: Neta, Lora, and Bruce. Helen grew a big garden on the farm and would can all her goods. She would help others with house cleaning and chores. She also belonged to Rorbeck Happy Homemaker Club. In 1965, Harry and Helen moved into the town of Elk Horn. They enjoyed polka dancing on Saturday nights and supporting their grandchildren in their school sporting events and other activities. In March of 2013, Helen moved to Salem Lutheran Homes in Elk Horn. Helen died on Monday, December 23, 2019 at Salem Lutheran Homes, attaining the age of ninety-five years, three months, and twenty-four days. In addition to her parents, she was preceded in death by her husband Harry and her sister Valeria Jensen. She is survived by her children: Neta and her husband Terry Sander of Elk Horn, Iowa; Lora and her husband Jim Rucker of Staunton, Illinois; Bruce Roenfeld and his wife Marcia of Panora, Iowa; 8 grandchildren; 15 great grandchildren; nieces and nephews; other family members and friends.

Helen Marie Roenfeld, daughter of Nels and Dora (Knutsen) Nielsen, was born August 29, 1924 on her parent&#8217;s farm in Clay Township, Shelby County, Iowa. She was baptized at Jacksonville Lutheran Church and confirmed at the Danish Lutheran... View Obituary & Service Information

The family of Helen Marie Roenfeld created this Life Tributes page to make it easy to share your memories.

Send flowers to the Roenfeld family.