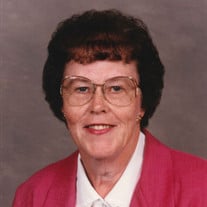 Helen Marie Leinen was born on March 4th, 1933 to Carl and Marie (Feldman) Kramer in Earling, Iowa. She was baptized and confirmed at St. Joseph’s Catholic Church, and attended St. Joseph’s Catholic School, graduating with the class of 1951. On January 26, 1955, Helen was united in marriage to Bernard Leinen at St. Joseph’s Catholic Church. They became parents to six children: Carol, Gary, Patty, Lori, Steve, and Randy. Helen was a homemaker and raised her family. She was a huge help to Bernie on the farm, first in Shelby, then later in Panama, hauling in corn, helping with the cows and hogs, planting a garden, doing whatever needed done. Helen served as secretary and treasurer of the Panama Parish Groups for a number of years. Helen and Bernie loved to play mixed league softball. They also enjoyed going on bus tours over the years, visiting many states and Canada for a total of 18 tours. After retiring from farming and moving to Harlan in 1995, Helen spent time playing cards with a ladies group, and attending the many activities of her children, grandchildren, and great-grandchildren. Helen died on Friday, March 27, 2020 at Elm Crest Retirement Home having attained the age of eighty-seven years and twenty-three days. She was preceded in death by her husband Bernie, her parents, her brothers Norman and Mark, and her sister Mildred. She is survived by her children: Carol and her husband Randy Vogel of Ankeny, Iowa; Gary Leinen and his wife Barb of Earling, Iowa; Patty and her husband Duane Assmann of Harlan, Iowa; Lori and her husband Gail Weis of Omaha, Nebraska; Steve Leinen and his wife DeeDee of Panama, Iowa; and Randy Leinen and his wife Lisa of Harlan, Iowa; 26 grandchildren; 30 great grandchildren; brother Ralph Kramer and his wife Eula of Woodbine, Iowa; sisters Alma Leinen and her husband Rich of Portsmouth, Iowa; Stella Lefeber of Portsmouth, Iowa; Jeanette Kramer of Harlan, Iowa; Marie Pemberton of Kansas; Irene Lefeber of Portsmouth, Iowa; sisters-in-law Mary Ann Kramer of Earling, Iowa; Virgina Reinig of Portsmouth, Iowa; brother-in-law Joe Leinen and his wife Jeanette of Council Bluffs, Iowa; other family members and friends.

The family of Helen Marie Leinen created this Life Tributes page to make it easy to share your memories.

Send flowers to the Leinen family.