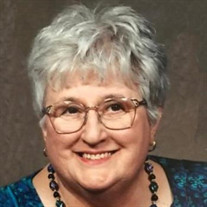 Helen Winifred Henschel was born January 2, 1936, in Kitchener, Ontario. She was the daughter of Reverend Clarence A. and Frieda (Lucht) Kramer, and one of nine children in her family. Helen and her twin brother Herman were baptized by their father on February 9, 1936, at First St. Paul parsonage in Wellesley, Ontario. In November 1948, Helen's parents moved the family to Hillpoint, Wisconsin with the three youngest children still at home. Following graduation from high school in Wisconsin in 1953, Helen earned her bachelor of science degree from the Central Institute for the Deaf, Washington University in St. Louis, Missouri, graduating in 1957. She married Kenneth W. Henschel in 1956, days before he shipped off to Germany with the US Army. Kenneth later joined the U.S. Air Force as a Chaplain, and Helen spent her career teaching hearing-impaired and other children at various military bases spanning Illinois, North Dakota, Kansas, Florida, Alabama, Texas, Ohio, New York, and West Germany. Upon her divorce from Kenneth in 1978, she took a teaching position with AEA 13, Harlan, Iowa; where she spent the remainder of her career and life. Helen truly loved both her job and the team with which she worked at AEA 13. Her patient, joyful attitude made her an exceptional teacher to hearing-impaired children and an inspiring mother, sister, Aunt and friend. Helen also played the organ at Peace Lutheran and other churches in the Harlan area over the past four decades. Helen is survived by the four children she loved unconditionally, Jonathan, Peter, James and Elizabeth; along with numerous grand-children. She is also survived by her sister Louis Clifford (Port Colborne, Canada), sisters-in-law Judy Kramer (Lake View, Iowa), Jane Kramer (Southampton, Canada) and Connie Kramer (Waterloo, Iowa), along with nephews and nieces spread across Canada and the US. "Above all, love each other deeply, because love covers over a multitude of sins." 1 Peter 4:8 Any memorials are suggested to be directed to the Central Institute for the Deaf. https://cid.edu/support-cid/donate/ or Central Institute for the Deaf 825 S. Taylor Avenue Saint Louis, MO 63110

Helen Winifred Henschel was born January 2, 1936, in Kitchener, Ontario. She was the daughter of Reverend Clarence A. and Frieda (Lucht) Kramer, and one of nine children in her family. Helen and her twin brother Herman were baptized by their... View Obituary & Service Information

The family of Helen Winifred Henschel created this Life Tributes page to make it easy to share your memories.

Send flowers to the Henschel family.