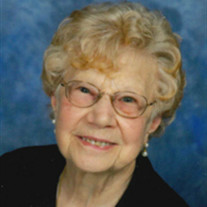 Helen Ruth Blum, daughter of Clara Glawinski Doan and Ray Doan, was born July 31, 1921 in Dow City, Iowa. She graduated from the Dow City Consolidated School. Helen married Edgar Joseph Blum on July 31, 1939. Helen had joined the Catholic Church and had her First Holy Communion on their Wedding Day. To this union they were blessed with five children: Marilyn Roselle, Linda Louise, Kenneth Joseph, Keith Gerard, and Cynthia Ann. Helen and Edgar farmed near Earling, IA where they raised their family. They lived on the Clarence Arkfeld farm after they got married, then moved to a farm northwest of there which was had 120 acres, and later bought 80 acres from Edgar's father. Helen had worked at CDS for a while, then Little Flower Haven in the kitchen and laundry. Helen was a member of the Des Moines Diocese Catholic Daughters and served as President for a term. She also was an active member of the Altar and Rosary Society at St. Joseph's Church, her home parish. Edgar and Helen had moved off the farm in the mid-1960's and built a new home in Earling. When Edgar was no longer able to be at home, Helen visited him at the Little Flower Haven almost daily for most of the day for his seven and half year stay at the facility. After a few more years, Helen moved to the Westridge Apts. where she lived for several years. Then she moved to Elm Crest Assisted Living for 2 years and 4 months and then ultimately to Atlantic Specialty Care. She passed away February 22, 2021 at that facility in Atlantic, Iowa with some of her family attending her after having received Last Rites the evening before, from Fr. Trevor Chicoine, Pastor of Saint Peter and Paul Catholic Church in Atlantic. Helen had attained the age of 99 years, 6 months and 22 days. She was preceded in death by her husband Edgar and Helen's parents Clara and Ray Doan, her brother Raymond Doan and sister Nellie Peterson and sons-in-law, Charles Freund and Jack Munchrath. She was also preceded in death by her father-in-law John Peter Blum, mother-in-law Elizabeth (Ruschenburg) Blum, in-laws Fr. Victor, Society of Jesus, Sister Roselle, Order of Saint Francis, Edgar, Fr. Virgil, SJ, Edwin (Eddie), Ermin (Ernie), Mary Ann (Mrs. Joe Wilwerding), Dolores (Dottie) (Mrs. Jerald Kaufman), Jim, Verne, Reno, and Cyril (Bob) Blum. She is survived by daughter Marilyn Munchrath of Omaha, NE, daughter Linda and her husband William Ebbinga of Griswold, IA, son Kenneth and his wife Connie Blum of Lenexa, KS, son Keith and his wife Tonya Blum of Lenexa KS, and daughter Dr. Cynthia Schneider of Mobile, AL, along with 21 grandchildren and 66 great-grandchildren, 5 great-great grandchildren and many friends.

The family of Helen Blum created this Life Tributes page to make it easy to share your memories.

Send flowers to the Blum family.