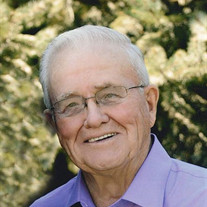 Harold Gustav Schulte, son of Rudolph and Veronica (Albers) Schulte, was born on October 1, 1931 in Westphalia, Iowa. As a child, Harold spent most of his time on his family farm outside of Westphalia. Harold was baptized at St. Boniface Catholic Church in Westphalia where he remained a member for the entirety of his life. He attended St. Boniface grade school and high school where he graduated in 1949. He later attended St. Ambrose College in Davenport, Iowa. After high school, Harold went on to serve in the Korean War. He was on the front lines where he earned a variety of medals including: Combat Infantry Badge, United Nations Service Medal, Korean Service Medal with Bronze Service Star, National Defense Medal, Republic of Korea Presidential Unit Citation, and Good Conduct Medal On February 6, 1956, Harold was united in marriage to Pearl Marie Sonderman at St. Peter’s Catholic Church in Defiance, Iowa. To this union eight children were born: Mike, Dan, Connie, Lori, Gary, Julie, Curt, and Jill. Harold started farming in 1956 when he farmed his grandparents Gustav and Anna Schulte’s farm northwest of Earling, Iowa. In 1966, he moved to the family farm where he was born. He raised hogs, cattle, sheep, corn and soy beans. He remained on the family farm the entirety of his life. Harold retired in 1996 and enjoyed traveling with Pearl to warmer climates in the winter. He also enjoyed playing cards (especially Pitch), watching his grandkids in many different events and being active in the American Legion, Knights of Columbus, St. Boniface Parish Council, Westphalia Athletic Association, and the Westphalia Volunteer Fire Department. Harold was an avid sports lover and grew up loving all sports but especially baseball. His favorite team was the New York Yankees and he often said that there really wasn’t a World Series if the Yankees weren’t playing in it. Harold died at his home surrounded by his loving family on June 17, 2021 having attained the age of eighty-nine years, eight months and sixteen days. In addition to his parents, he was preceded in death by his brother Francis Schulte. He is survived by his wife Pearl Schulte of Westphalia, Iowa; children: Mike (Laura) Schulte of Charlotte, North Carolina; Dan (Susie) Schulte of Portsmouth; Connie (John) Chamberlain of Elkhorn, Nebraska; Lori (Ernie) Buttry of Omaha, Nebraska; Gary (JoAnn) Schulte of Westphalia; Julie (Randy) Bruck of Portsmouth; Curt (Pam) Schulte of Glenwood, Iowa; Jill (Jeff) Govier of Elkhorn, Nebraska; 23 grandchildren; 17 great grandchildren; his sister Mary Ellen Keating of Charter Oak, Iowa; nieces and nephews; other relatives and many friends.

Harold Gustav Schulte, son of Rudolph and Veronica (Albers) Schulte, was born on October 1, 1931 in Westphalia, Iowa. As a child, Harold spent most of his time on his family farm outside of Westphalia. Harold was baptized at St. Boniface Catholic... View Obituary & Service Information

The family of Harold Gustav Schulte created this Life Tributes page to make it easy to share your memories.

Send flowers to the Schulte family.