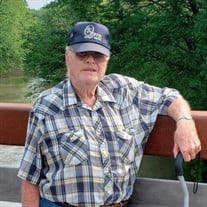 Harold Frederick Jens, son of Herbert and Cora (Miller) Jens, was born on March 25, 1934 in Omaha, Nebraska. He was one of three children. He graduated from Hancock High school in 1952. After graduation, Harold was drafted into the United States Army. He served between the Korean and Vietnam war where he spent time in Germany. After his honorable discharge from the army, he began farming. On July 30, 1976, he was united into marriage to Leanna Johnson at the United Methodist Church in Harlan, Iowa. They combined his three children Tammie, Paula and Stanley with her two children Danny and Christine and started a new family. In 1978, Steven was born. After 20 plus years of farming and custom baling Harold went on to further his education and received his Associates Degree in Tool and Die from Iowa Western Community College. He worked for various businesses in tool and die. After retiring from tool and die, he mowed at the Harlan Golf and Country Club until he retired at the age 83. His greatest passion was being outdoors especially fishing, hunting and gardening. Harold also enjoyed playing bingo, working on Sudoku puzzles, telling stories, going on walks, sitting on his front porch, and spending time with his grandchildren. Harold passed away on Friday, June 26, 2020 at Jennie Edmundson Hospital in Council Bluffs, Iowa having attained the age of eighty-six years, three months and one day. He was preceded in death by his parents Herbert and Cora; brother Herbert Curtis, and sister Marian Holtz. Left to cherish his memory are his wife of forty-three years Leanna Jens of Avoca, Iowa; children Tammie (Denny) Jens of Lewis, Iowa; Paula "Pete" Jens of Atlantic, Iowa; Stan (Michelle) Jens of Elk Horn, Iowa; Steven (Katherine) Jens of Harlan, Iowa; Danny (Jennifer) Smith of Avoca, Iowa; Christine Riggert of Northwood, Iowa; grandchildren Joel Jens, Holly Jens, Cody Jens, Jesse Jens, Olivia Jens, Kaine Smith and Maija Riggert; sister-in-law Patty Jens of Avoca, Iowa; nieces and nephews, other family and many friends.

Harold Frederick Jens, son of Herbert and Cora (Miller) Jens, was born on March 25, 1934 in Omaha, Nebraska. He was one of three children. He graduated from Hancock High school in 1952. After graduation, Harold was drafted into the United States... View Obituary & Service Information

The family of Harold Jens created this Life Tributes page to make it easy to share your memories.

Send flowers to the Jens family.